NEWPORT BEACH, Calif., October 29, 2019 (Newswire.com) - MindHeart Lab Robotics (“MindHeart” or the “Company”), the maker of the EduPal Robot, is pleased to announce that the Company has been formally admitted into the prestigious BrainMind technology innovation ecosystem, a highly selective private ecosystem chaired by LinkedIn founder, Reid Hoffman.

“We are delighted to be part of the prestigious BrainMind ecosystem,” remarked Tony Meador, MindHeart CEO and Founder. “The team will greatly benefit from the expertise and support of this distinguished group of investors, scientists, and entrepreneurs.”

According to the website, BrainMind is a “platform and private community of top brain scientists, entrepreneurs, philanthropists, and academic institutions collaborating to accelerate impactful innovation in brain science. At this important juncture in neuroscience, the BrainMind ecosystem is combining the most talented of these groups in novel ways to collectively shepherd, support, and fund ideas that can be translated from labs into interventions that will benefit humanity.”

Dr. Maureen Dunne, Co-founder at MindHeart, and former Rhodes Scholar, believes the company’s EduPal Robot will benefit enormously from the support of the BrainMind ecosystem: “Our goal from the beginning has been to deliver a platform that inspires human connection, thereby eliminating the traditional barriers that define the relationship between humans and machines on an interface level. The BrainMind Ecosystem will provide access to powerful networks, ideas, and thought-leaders to help us bring this vision to its most impactful endpoint.”

In addition to entrepreneurial support, BrainMind hosts invite-only gatherings for companies within their private ecosystem at the world’s most preeminent institutions for technology and brain science, including Stanford, MIT, and Oxford.

AI Expert and Co-founder Ben Bavarian, a former VP of Motorola considered by industry peers to be the ‘father of fingerprint biometrics’, added: “Our robot platform engages people with mobility, voice and sensory capacities that transcend what is possible with laptops, smartphones, or tablets, while machine learning and AI may detect complex patterns and behaviors for predictive insights to proactively address a broad range of issues in learning and healthcare. The BrainMind Summits at Stanford, Oxford and MIT will provide additional opportunities for our team to share the EduPal Robot platform and receive feedback from a revered network as we continue to develop, collect data and integrate advanced features.”

Co-founder Cathy Schwallie Farmer, a former Chief of Staff IT at Kaiser Permanente, also expressed excitement when hearing the news: “It’s a tremendous honor to be selected for the BrainMInd Ecosystem. There is an unmistakable sense of elite experience and intellectual capital involved here. And I can already tell my own focus with Hospital and Autism Spectrum Disorder use cases, and our ability to make a strong impact in this space with EduPal, will be meaningfully enhanced by access to this resource.”

In his letter to the MindHeart Lab team, Chairman Reid Hoffman remarked: “Your peers at BrainMind share two things: passion for the BrainMind space and significant leadership in your respective careers,” adding, in the final paragraphs, “the only ongoing requirement is your brilliance and creativity.” 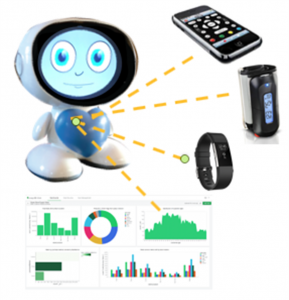