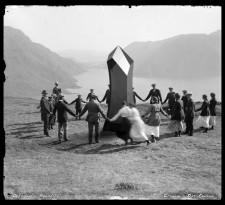 SAN FRANCISCO, July 14, 2020 (Newswire.com) - IN BRIGHT AXIOM, a new feature film by Pen & Banjo in association with Nonchalance, explores the legend and lore of San Francisco's Latitude Society, a secretive participatory-arts group which, at different times, has been described as Game/Cult, Secret Society, Pyramid Scheme, and "Path of Transformation."

Director Spencer McCall's first foray into filmmaking was as lead documentarian for a failed dog-cloning start-up. His next project was 2013's The Institute, the indie film which became the inspiration for Jason Segel's recent AMC series "Dispatches From Elsewhere." IN BRIGHT AXIOM represents McCall's long-awaited and highly contested follow-up film, which ultimately led to the director being attacked and blacklisted by members of the Bay Area immersive arts community.

IN BRIGHT AXIOM weaves an intriguing cautionary tale set amid a world of urban mystery, replete with underground speakeasies, hidden arcades, and joyful rites of passage. As zealous community members delight in a newfound identity and way of life, the House of the Latitude is ultimately tested beyond its limits. Grave questions emerge as society members become entangled in the game-like experiments of the Society’s founders. From the minds who created The Jejune Institute, IN BRIGHT AXIOM explores the unforeseen consequences of a creative community that dared to wholeheartedly embrace the unknown.

The Latitude was conceived by Oakland artist Jeff Hull (creator of Oaklandish and The Jejune Institute) in hopes of reviving the ancient arts of embodied ritual, ceremony, and rites of passages for a generation adrift. The film heartbreakingly exhibits how he found himself perplexed and outcast from the tight-knit community he had helped to cultivate.

Critics and festival audiences have responded enthusiastically to IN BRIGHT AXIOM, describing it as "a brilliant film" with "a surreal, dreamlike quality" that is "colorful, hypnotic, and mind-opening."

IN BRIGHT AXIOM also features never-before-seen discourse from the mesmerizing hip-hop polymath RAMMELLZEE and original music by Justin Robbins, with additional songs from Isan, Tickles, and ü-Ziq. Followers of Meow Wolf, Sleep No More, Ingress, and other immersive and augmented reality entertainment should take note.

On July 14, "In Bright Axiom" (NR, 1hr 30min) becomes available on streaming platforms such as iTunes and Amazon, as well as on Blu-ray and DVD, distributed by Gravitas Ventures.