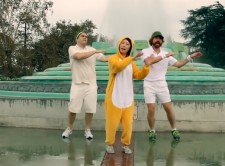 Malizaki lives in the suburb of Los Angeles and first sang the song to entertain her elementary school age kids while on Spring break last year.  The song got stuck in her head, so she recorded the song with basic Japanese phrases as she teaches Japanese conversation class at Conejo Valley Adult School.  She loved the song very much, she made a music video.  Her non-Japanese friends kept on asking her what she was singing about, so she recorded a translated version and used the same video for the music video, thus giving it a “foreign film” effect.  Michael Pollock, musical director at the Second City Hollywood says “Nap Time! (by nap8sta) is a delight.”  Both versions of song are available on YouTube:

"it's a great idea" to have an official song for National Napping Day.

Boston University (BU) Professor, William Anthony, PH.D., and his wife, Camille Anthony, presidents of The Napping Company, founded this observance in 1999 to make people aware of the many health benefits of napping.  ‘We chose this particular Monday after the daylights saving time starts because Americans are more nap-ready than usual after losing an hour of sleep to daylight savings time” said Dr. Anthony.  He also says ‘it’s a great idea” to have an official song for National Napping Day.

As Michelle Malizaki sings, “nap time is the best time of the day,” indeed.  Taking a nap will improve your productivity and mood, and it doesn’t cost anything.  What better to do when you are robbed an hour of precious sleeping time?  Enjoy “nap time” today!