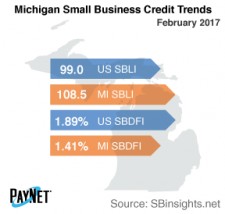 Chicago, IL, April 13, 2017 (Newswire.com) - PayNet, the leading provider of small business credit data and analysis for the commercial and industrial lending industry, announces that in February 2017 overall defaults worsened among small businesses in Michigan, with default rates in 9 of the 18 major industries rising in the state.

PayNet’s Small Business Default Index (SBDFI) for Michigan stood at 1.41% following a 9 basis point rise from January. Compared to the national SBDFI level of 1.89%, Michigan’s SBDFI was 48 basis points less. Despite the unfavorable uptick from the previous month, the index is basically unchanged from a year ago. Over the last year, the national SBDFI increased 30 basis points, which was a much sharper increase than the 2 basis point increase displayed by the Michigan SBDFI.