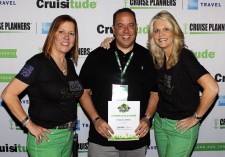 With the fiery mantra “CP Ignite” as this year’s theme, the Cruise Planners® network of home-based travel agents, the nation’s largest, learned the latest in branding, marketing and technology from their home office and keynote speakers within the industry. During convention, Cruise Planners® awarded Michael Consoli as the top-performing agent in the following categories:

In addition, Consoli was recognized as a top producing agent for Royal Caribbean Cruises and Holland America cruise line. Consoli was also the most recognized agent at this year’s convention, receiving the top position in highest number of categories.

“I am so excited to be honored as a top producer in so many categories, It is recognition of my hard work and of the service I provide my clients,” said Consoli. “It is also a wonderful testament to my client’s loyalty as I could not achieve this level of recognition without their continued support and consistent referrals.”

One of Michael’s clients described him as one of the “most knowledgeable travel agents EVER” saying he provided “the most professional and knowledgeable service I have ever received. I've referred Michael to all my friends and will continue to do so because of the level of service and attention he provides.”

Travelers looking for a travel professional with a focus on personal service should reach out directly to Michael at (800) 913-7245 or visit: http://www.planmycruise.com to customize their next vacation experience.