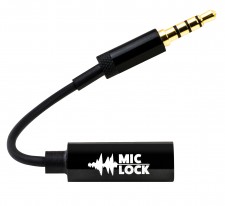 CAMAS, Wash., February 6, 2019 (Newswire.com) - Colampra announces the launch of its newest cybersecurity product, the Mic-Lock with SOUNDPASS — a device that prevents hackers, apps and government agencies from listening to private conversations on any internet-connected device. Mic-Locks are the only digital signal-blocking devices for microphones on the market.

Colampra is a company dedicated to keeping people safe from cyber threats and wants people to know it is important to take action now. Once someone gains unauthorized access to a laptop, tablet or smartphone, they gain the ability to turn on both the microphone and webcam to record audio and/or video.

Whether or not someone has been affected by a cybersecurity breach, everyone should be concerned about their privacy online. Mark Zuckerberg, The Pope and former FBI Director James Comey recommend covering a laptop’s webcam. Data hacking is no longer just affecting those in the public eye; it is also happening to everyday people and their families. In this day and age, not securing webcams and microphones is a huge mistake with great potential for frightening consequences.  Many people report seeing mobile ads that appear from Google or on their Facebook feed after they had a real-life chat about a subject they have not searched for or written about online. On Jan. 28, Apple got notification from a teenager and his mother that Apple’s new Group FaceTime feature allowed incoming callers to eavesdrop without the receiving party answering the call. If this escaped eavesdropping bug can happen to one of the top technology leaders, imagine the flaws or back-doors in the myriad of applications that people have given consent to access their microphones. It was reported that the teen will get a monetary Apple iOS bug award, but perhaps the great reward is gaining insight and awareness for how easily the devices people carry with them all the time can so easily eavesdrop on them.

The new Mic-Lock with SOUNDPASS allows the user to listen without being heard while using any 3.5mm headphone. There is no sacrificing cybersecurity for entertainment. Enjoy favorite music, podcasts and videos with peace of mind.

“We designed the first webcam covers that were reusable for over 250,000 uses. This was much better than the common double-sided tape products. As RATs and Cam Jacking came along, so did audio hacking. There are an estimated 10 billion cameras and over 20 billion microphones that are connected to the internet. When someone hacks your webcam, they are also turning on your microphone,” said Ric Ralston, co-founder of Mic-Lock and Colampra. “It became apparent audio hacking had an even greater potential for security risk. We designed and released the Mic-Lock last year - the first product for smartphones and computers to address microphone cybersecurity.

“Over the last 18 months, we have had a great deal of positive product feedback from our customers globally on Mic-Lock. One of the most common requests was to find a way to listen to music while maintaining microphone security without any loss of audio quality or fidelity. We designed the Mic-Lock with SOUNDPASS to include a direct bypass audio with all the characteristics of the existing microphone simulation technology,” Ralston explained.

Mic-Lock with SOUNDPASS is as sleek and stylish as it is functional. An unobtrusive and durable cord connecting the 3.5mm jack to the headphone input adds two inches of extra reach to the headphone cord, making it easy to move around while working, exercising or simply relaxing.

Utilizing a proprietary semiconductor circuit, Mic-Lock with SOUNDPASS works by emulating a live microphone on any device – computer, tablet or phone. When plugged in, Mic-Lock becomes the default “microphone,” effectively blocking unauthorized third parties from exploiting the microphone without consent. No additional software is needed to install for Android™, iPhone™[1], Windows™ or Mac™ devices. Simply plug and play.

In an effort to safeguard against webcam hacking as well, Colampra is offering a free webcam cover with every Mic-Lock with SOUNDPASS order. Expertly designed, Colampra’s covers are made of nanotech material inspired by the tiny pads on a gecko’s toes. This unique technology employs negative air pressure — not adhesives — to adhere to the surface of the device without scratching or leaving a sticky residue.

Start the new year off by making a commitment to data security with the new Mic-Lock with SOUNDPASS. There really is nothing more important than keeping everyone safe.

ABOUT THE COMPANY: Based in Camas, Washington, Colampra is dedicated to providing commonsense cyber privacy solutions to individuals, corporations and government agencies.

[1] iPhones that are Lightning port only (iPhone 7 and above) require the adapter that came with the iPhone or a third-party Lightning to 3.5mm adapter is required.

Based in Camas, Washington, Colampra is dedicated to providing commonsense cyber privacy solutions to individuals, corporations and government agencies.