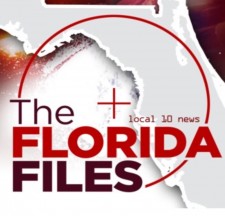 PEMBROKE PARK, Fla., August 30, 2019 (Newswire.com) - Titled "Yahweh Ben Yahweh and The Temple Of Love: Cult or Conspiracy?", Florida Files Podcast Producer and Reporter Michelle F. Solomon looks into the many sides of the story of the charismatic preacher Hulon Mitchell, Jr., who proclaimed himself the Son of God when he arrived in Miami in the late 1970s. The Florida Files goes step by step through Yahweh Ben Yahweh's ascent and how he bought up land and cleaned up Miami's Liberty City. He rubbed elbows with politicians, and there was even a Yahweh Ben Yahweh Day proclaimed by Miami's mayor in the 1990s. Then murders at an apartment complex, where police found a victim's severed ear, led back to the Temple of Love.

"There are three sides to this story, at least. I talk to a former cult member who says he escaped a temple of terror. I speak with Yahweh Ben Yahweh's biological daughter who said the government paid informants to lie," says Solomon. "But, the prosecutor, who hasn't spoken to anyone publicly about the case in three decades, disputes any kind of conspiracy theories."

Hear from attorneys who believed Yahweh's innocence, and from a cult expert who weighs in on the cult aspects of The Temple Of Love. The series also features sound from Local 10's vast video collection chronicling the decade of the temple.  Yahweh Ben Yahweh was convicted, as were some of his followers.

"It took two months of combing through clippings and archives, interviews and investigating to go back into one of Miami's most perplexing stories. Still, nothing is cut and dried," says Solomon. "Listeners are in for quite an audio journey." The Florida Files can be found on Local 10.com Apple Podcasts, Google Play, Stitcher, Spotify, Player FM, or on home devices by saying "Play The Florida Files Podcast."

Metro Community Development Announces Deadline for Genesee County Minority PPE Grant Program
Genesee County minority businesses (African-American and Latinx) are eligible for special grant funding. The grant fund has been established to help Genesee County minority businesses by reimbursing business-interruption and closure expenses, and other costs incurred to mitigate the effects of the pandemic. Qualifying businesses will receive reimbursement for expenses incurred after March 1, 2020 or to pre-pay new purchases for supplies and equipment. All funds must be disbursed before December 15th.
Curtis & Associates - Nov 20, 2020