Memories and Dreams, The Art of Bertil Vallien on Exhibit at FORM Miami 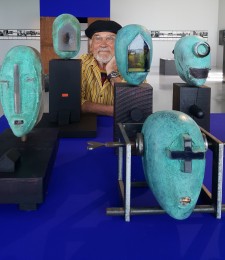 MIAMI, December 6, 2017 (Newswire.com) - From the Crystal Kingdom in Sweden to the FORM Miami Exhibition comes Memories and Dreams, The Art of Bertil Vallien | Exhibited by Schantz Galleries Contemporary Glass, a collection of Vallien’s signature sand-cast glass works reflecting the artist’s thoughtful exploration of the multi-faceted relationship of the human journey.

Vallien’s focus on looking inward is achieved in myriad ways, one of which is his unique glassmaking technique. A leader in the Swedish glass industry for more than 40 years, Vallien formulated his own method for casting glass in sand that creates depth and radiance in the material. Artworks are driven not by their final appearance — although their visual impact is stunning — but rather by their content. Vallien’s preparatory sketches are carefully considered blueprints of both the external form and the inner details. Layers — both physical and psychological — are created through a multi-step process. Surface textures result from the imprint of objects placed on the walls of the mold, which are also dusted with powdered metal oxides to release color. As the molten glass is poured into the mold, Vallien incorporates a variety of objects from sheet metal and glass threads to figures and other colored forms. Once the glass cools, the suspended animation reveals itself in full glory. Light reflects off the brilliant surfaces and assorted angles of the perimeter, but more dramatically it emanates from within.

… knowing the exact moment at which to capture a shift of light or expression and wrench the secret from the glass is what it is all about.

Vallien has said that “knowing the exact moment at which to capture a shift of light or expression and wrench the secret from the glass is what it is all about.” Just as his technical approach unearths internal “secrets,” his visual motifs are explorations of the subconscious. The artist is motivated by various things — from stories he hears on the news, to people he has met, to his religious upbringing and questions about faith, to wars both historical and contemporary. Despite these concrete inspirations, the work is not meant to pose facile questions with prescribed answers. Vallien’s art embraces this idea, transforming the events and experiences that inspire him into universal archetypes and symbols, upon which viewers layer their own perspectives. A shifting “truth” is created when two spirits — that of the artist and that of the viewer — coalesce.

Today, the path to profound understanding of the world around us is often hampered by the anxieties of contemporary living. Our quest to understand our fellow man is fraught with difficult existential questions brought on by chaos, war and unsettling socio-political situations. Vallien’s series of works inspired by Franz Kafka pay homage to a visionary 20th-century author who mingled realism and fantasy, and whose protagonists struggled through surrealistic circumstances in search of salvation. In Kafka III, a golden figure is trapped in an ashen cave that is part primitive spearhead part wire barrier system. His aura struggles to overcome the harsh cage, glimpses of his gilded light cleaving the surface.

­One series of works by Vallien was inspired by an aerial photograph of a bombed-out village in northern Iraq that he saw in a newspaper. Much has been destroyed in the commission of war, from homes to lives to ancient cultural treasures. Abode II is an imagined archaeological excavation of a post-apocalyptic world, where the earth is turned inside out, its soul exposed and its ability to safely house man thrown into limbo. Mill is a hybrid milieu of runic designs and modern shiny architecture set upon crumbling earth besieged by bullet-like barbs.

The Roman God Janus, the god of transition, gateways and duality, oversaw the beginning and end of conflict. Vallien’s Janus sculptures have rough-hewn stone-like carved facades on one side and smooth transparent arcs on the reverse within which images of closed-eye faces are suspended in the glass. This interest in the transitory nature of life has also inspired Vallien’s boat works. The elegant Destination Unknown also reflects a sense of adventure and the more winsome side of exploring the unknown. Vallien has written that he makes boats “that sink through memories and dreams, [that] require not latitudes to navigate by; they steer towards the horizon of imagination.” He encourages his various travelers (and by association, us) to “put his trust in the delicate skin that separates him from the unknown.”

Through both physical expression and symbolic associations, Vallien senses the world from the inside out and opens this channel of experience to his viewer. Definitive answers become unnecessary, and an enlightened, empathetic and open-minded ethos rises.

Portrait of the artist, Bertil Vallien 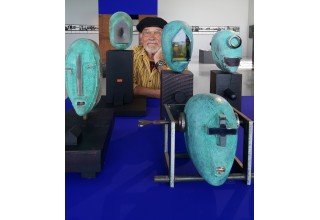 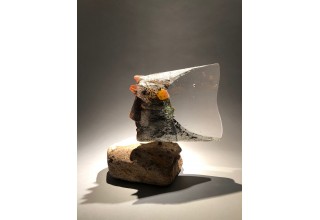 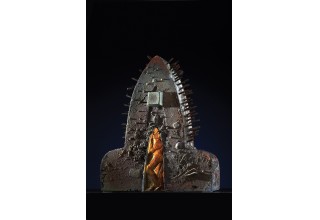 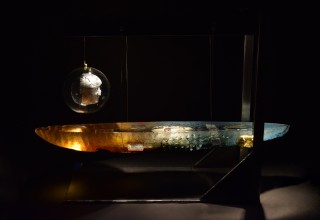