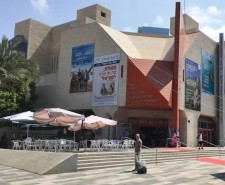 WHIPPANY, N.J., August 28, 2017 (Newswire.com) - A group of memoir writers at the Lester Senior Housing Community gathered together for a year to write their stories that would become animated short films in Israel in a program called "Revolving Doors." The intercontinental collaboration between Whippany, N.J. and Holon, Israel was spearheaded and facilitated by Paul Rabinowitz, executive director of ARTS By The People, the non-profit organization in Morristown that runs the various creative arts programs at Lester and its sister senior living communities.

Participants worked via email and Skype with animation students at the Holon Institute of Technology in Israel, under the supervision of their animation coordinator, Yael Ozsinay. The memoirs were edited and transformed into works using film, stop-motion photography and animation by second-year students. The films were screened for about 140 people at the annual Animix Festival at the Cinemateque theatre in Tel Aviv on Aug. 11. The U.S. screening is being planned for early fall with a talk-back planned with some of the writers.

Everyone got great real-life experience from doing this and both parties — seniors and students — are interested in doing this again. Our writers had a blast and are looking forward to the local screening.

Rabinowitz (pictured in front of the theatre) was there to introduce the project, read a statement on behalf of the memoir writers and present gifts to the participating students from ARTS By The People and the Jewish Community Housing Corporation of Metropolitan New Jersey (JCHC), the non-profit organization that owns and manages four senior living communities in Essex and Morris counties.

"The films were great and the project got a great reception at the festival," said Rabinowitz. "Everyone was really moved by the whole thing."

Rabinowitz said a strong connection has been forged between the senior writers at Lester and the students in Holon. "Everyone got great real-life experience from doing this and both parties —seniors and students — are interested in doing this again. Our writers had a blast and are looking forward to the local screening."

In addition to a robust calendar of educational, cultural and recreational activities, residents of the JCHC communities enjoy assorted creative arts programs facilitated by ARTS By The People; they include poetry and creative writing, fine art and horticulture. The JCHC offers older adults age 62+ a range of lifestyle options, amenities and services in Whippany, South Orange and West Orange, New Jersey. The Lester Senior Housing Community has recently opened a specialized Memory Care Suite for those with dementia-related diagnoses. For more information, visit www.jchcorp.org.