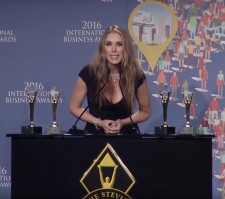 The International Business Awards are the world’s premier business awards program. All individuals and organizations worldwide – public and private, for-profit and non-profit, large and small - are eligible to submit nominations. The 2016 IBAs received entries from more than 60 nations and territories.

Nicknamed the Stevies for the Greek word for “crowned,” the awards were presented to winners at the gala awards banquet at the Rome Cavalieri Waldorf Astoria Hotel in Rome, Italy on 21 October.

A record total of more than 3,800 nominations from organizations of all sizes and in virtually every industry were submitted this year for consideration in a wide range of categories, including Company of the Year, Marketing Campaign of the Year, Best New Product or Service of the Year, Startup of the Year, Corporate Social Responsibility Program of the Year, and Executive of the Year, among others.

“Very strong entry, Nutracelle's results were amazing. This company has grown at a rapid pace, and their KPI information indicates they have the ability to exceed their own expectations. Very interesting entry to read about on the Internet, as well. Awesome job,” wrote one of the judges.

Melanie Wildman is ecstatic about her newest venture’s recognition. “Thank you, Stevie Awards! It is not often enough that women in business are recognized for the amazing accomplishments they achieve. The platform you provide for businesses is invaluable. Nutracelle is truly a team effort and I am proud of what our team has accomplished in such a short amount of time. We will continue inspiring women to achieve more than they dream is possible.”

Stevie Award winners were determined by the average scores of more than 200 executives worldwide who participated in the judging process from May through early August.

“This year’s IBA judges were treated to many remarkable and inspiring stories of achievement around the world,” said Michael Gallagher, president and founder of the Stevie Awards.  “We look forward to sharing many of these stories with people around the world over the coming months, through the Stevie Awards blog and social media channels, with the hope that they will inspire and instruct the next generation of business achievers.”

Details about The International Business Awards and the lists of Stevie Award winners are available at www.StevieAwards.com/IBA.

Melanie Wildman is a mother of three, wife, Founder and CEO of two successful multi-million dollar companies, WLF Medical and Nutracelle, and a former Stevie Award winner for International Women in Business Award for Bronze Executive of the Year. Melanie, a former Mrs. Canada and First Runner up to Mrs. Universe lost over 100 lbs after having bariatric surgery, and she is passionate about helping others live healthier lives and achieving their dreams. Learn more about Nutracelle at http://nutracelle.com.

About the Stevie Awards