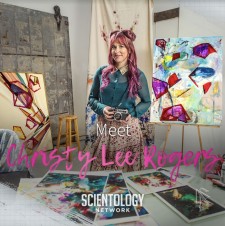 LOS ANGELES, December 21, 2019 (Newswire.com) - Scientology Network’s MEET A SCIENTOLOGIST, the weekly series spotlighting the everyday lives of Scientologists from around the world and all walks of life, announces an episode featuring renowned photographer and fine artist Christy Lee Rogers.​

Christy Lee Rogers creates breathtakingly beautiful photographic works of art using a novel underwater technique. By blending a baroque aesthetic with modern technology, her work is winning prestigious awards and fans all across the world.

Born and raised in Hawaii, Christy Lee Rogers grew up in and around water, developing an affinity for the element that would play a pivotal role in her future career. As a teenager, Christy became passionately interested in photography, spending hours in a darkroom developing her images. After finding the courage to pursue her passion professionally, she presented her first collection—models submerged in water, surrounded by billowing gowns against a solid black background. As her artwork defied conventional categorization, Christy found gallery owners hesitant to take her on. But the stunning luminescence, color and composition of her work garnered admirers and clients, and quickly become a gallery favorite. Today, Christy’s art is world-renowned, and the story of how she got there is a picture worth a thousand words.

The Scientology Network debuted March 12, 2018. Since launching, the Scientology Network has been viewed in 240 countries and territories in 17 languages. Satisfying the curiosity of people about Scientology, the network takes viewers across six continents, spotlighting the everyday lives of Scientologists, showing the Church as a global organization and presenting its social betterment programs that have touched the lives of millions worldwide. The network also showcases documentaries by independent filmmakers who represent a cross-section of cultures and faiths but share a common purpose of uplifting communities.