Meet a Scientologist Raises the Roof With John Chan 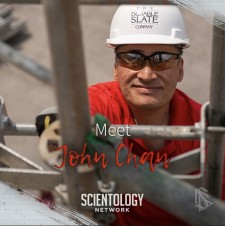 LOS ANGELES, February 10, 2020 (Newswire.com) - Scientology Network’s MEET A SCIENTOLOGIST, the weekly series spotlighting the everyday lives of Scientologists from around the world and all walks of life, announces an episode featuring the award-winning restoration expert John Chan.​

John Chan is an entrepreneur and preeminent restoration expert who took a struggling concern to the pinnacle of the roofing and restoration industry. When, as a college student on summer break, John signed on as a laborer for a small roofing business, he could not have predicted he would not only one day buy the company, but would grow it into a nationally recognized, world-class restoration powerhouse.

Born in Columbus, Ohio, to parents who had emigrated from Hong Kong, John Chan earned his economics degree from UCLA. Rather than beginning at the bottom rung of the corporate ladder, John decided instead to take a manual labor job in his hometown, hauling hundred-year-old slate roofing tiles up and down ladders. John soon rose through the ranks — from roofer to company treasurer to executive partner and finally to owner of Durable Slate. Rebuilding the company’s foundation with L. Ron Hubbard’s Administrative Technology, John expanded the company to multiple branches around the country, while also broadening its expertise to encompass a full range of exterior and interior restoration. Under John’s leadership, Durable Slate has been recognized as a leader in the restoration field, known for its historical revitalization of some of the nation’s most important structures: from the Florida State Capitol Building and the statehouse in his hometown of Columbus to the Frank Lloyd Wright Museum and Abraham Lincoln’s Birthplace.

The Scientology Network debuted on March 12, 2018. Since launching, the Scientology Network has been viewed in 240 countries and territories worldwide in 17 languages. Satisfying the curiosity of people about Scientology, the network takes viewers across six continents, spotlighting the everyday lives of Scientologists, showing the church as a global organization, and presenting its social betterment programs that have touched the lives of millions worldwide. The network also showcases documentaries by independent filmmakers who represent a cross-section of cultures and faiths, but share a common purpose of uplifting communities.

Neighbors Welcome the Scientology Volunteer Ministers and Join the Campaign to Help Bogotá Stay Well
The Scientology Stay Well campaign assumes even greater importance in Colombia with the increase in new COVID-19 cases in the country.
Scientology - Jul 15, 2020
Newswire