MEET A SCIENTOLOGIST Gets in Step With Claude Racine & Noah Valinsky 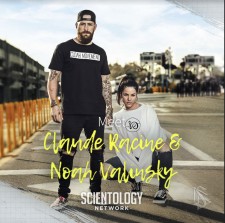 LOS ANGELES, December 10, 2019 (Newswire.com) - ​Scientology Network’s MEET A SCIENTOLOGIST, the weekly series spotlighting the everyday lives of Scientologists from around the world and all walks of life, announces an episode featuring professional dancers Claude Racine and Noah Valinsky, premiering on Dec. 10.

Claude Racine and Noah Valinsky are the force behind Cloah Movement, an avant-garde choreography and creative directing team in Los Angeles. This husband-and-wife duo combines her classical dance training with his street background to provide a fresh approach to choreography that has put them on the dance world map.

Claude Racine is originally from Montreal and moved to Arizona at the age of 8, where she underwent years of formal training in jazz, ballet and tap. Noah Valinsky was an inner-city Chicago kid who learned his moves from the rhythm of the streets. Dance was Noah’s avenue to escape the troubled path he was traveling. They met while on set together at a job in Los Angeles. Partnering personally and professionally, Claude and Noah found a niche by balancing his street-savvy freestyle with her graceful technique and structure.

The dancer/choreographer couple has worked with top talent like the Jonas Brothers, Gwen Stefani, Florence and the Machine, Toni Braxton and Zendaya. Their television appearances include everything from Will and Grace and Glee to The Voice and the Grammys — not to mention that they are totally in step with the likes of Netflix, Amazon, Nickelodeon, Sony Pictures and Disney.

Claude and Noah’s success motivated them to give back, opening their studio, Cloah Movement, to teach aspiring dancers diverse styles of dance. They share their talents with others because they believe “dancing is a shortcut to happiness.”