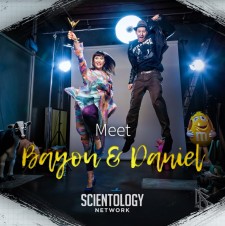 LOS ANGELES, December 18, 2019 (Newswire.com) - Scientology Network’s MEET A SCIENTOLOGIST, the weekly series spotlighting the everyday lives of Scientologists from around the world and all walks of life, announces an episode featuring writer/director duo Bayou Bennett and Daniel Lir.

Bayou Bennett and Daniel Lir are a husband-and-wife filmmaking team that uses the power of film to create stories that have a positive impact on society. As award-winning collaborators on everything from music videos to hard-hitting documentaries, they’ve been dubbed the “Dream Team Directors.”

ABOUT BAYOU AND DANIEL

A native of Israel, Daniel Lir’s life was forever changed by the breakout of the Gulf War when his mother uprooted the family and moved to Los Angeles. Growing up in L.A., he fell in love with film and filmmaking, eventually traveling to Manhattan to earn a degree from NYU film school.

Bayou Bennett was born in Maui, Hawaii. Even as a child she knew she wanted to impact society with her art. After receiving her master’s in fine arts, Bayou started teaching at the Parsons New School in New York. On a trip to Amman, Jordan, she saw firsthand the devastation of living with the constant threat of war and decided to make a film about it. After a chance meeting in a health food store, Bayou and Daniel began their artistic collaboration. Soon after, they began their personal collaboration, moving to Los Angeles, marrying and starting a family.

Gaining a reputation for their music video credits, the husband-and-wife team really made a name for themselves when they started taking home awards for socially conscious independent documentaries. Their film industry colleagues dubbed them the “dream team” and, thus, their company “Dream Team Directors” was born.

To date, Bayou and Daniel have received two Telly Awards and numerous prizes from national and international film festivals and have collaborated, directed and produced with such talents as Oscar-nominee Mark Ruffalo and Golden Globe-nominee Anthony Mackie. ​