Meditation Shrine for All Seekers Opens in the Poconos

HONESDALE, Pa., August 14, 2019 (Newswire.com) - ​​On July 16, 2019, over 200 yogis gathered in the pre-dawn hours at the Himalayan Institute’s idyllic wooded campus, lining up silently in a mood-lit hallway. Dressed in Indian kurtas and Western eveningwear, feet bare, the anticipation in the air was palpable — they had traveled from across the United States and around the world to bear witness to an event decades in the making. At 4:50 a.m., the practice began.

This early morning procession kicked off a consecration ceremony lasting two weeks and led to the opening of the Sri Vidya Shrine, a meditation hall and sanctuary for spiritual seekers of all backgrounds and traditions. The shrine will serve as a living link to the lineage of the Himalayan Tradition, which stretches back thousands of years in India.

“From here, we are fully connected to the very heart of the Masters, who have only one sacred message to the world: live long, live fearlessly, and let there be no discord in the world,” says Pandit Rajmani Tigunait, Ph.D., Spiritual Head of the Himalayan Institute.

The idea to consecrate the only shrine of its kind in the West was born with Swami Rama, founder of the Himalayan Institute. In the 1970s, he was the first to bring the Himalayan Tradition — along with now-familiar products like the Neti Pot — to the United States. The concept of introducing ancient yogic practices to a modern, global audience lies at the heart of the Institute’s mission and extends to the shrine itself, which is open to the public on a daily basis.

To build and dedicate a true shrine — a sacred space for reflection, contemplation, and meditation — is no small feat: a global community of meditators with a commitment to a shared vision, decades of spiritual practice at the shrine site, and the tireless efforts of hundreds of volunteers over several years at the Himalayan Institute headquarters all played major roles in ensuring the project's completion. The result of all of this preparation? A palpable energy for every seeker who enters the space, says Rolf Sovik, PsyD, President of the Himalayan Institute.

“We see a building, but we also feel an inspiration,” explains Dr. Sovik, “and that inspiration is also a place — a place we can come to for support, and for meditation practice of all kinds.”

To celebrate the consecration of the Sri Vidya Shrine, the Himalayan Institute is hosting an open house and tours at its headquarters at 952 Bethany Turnpike in Honesdale, Pennsylvania, from 2–5 p.m. on Saturday, Aug. 17, 2019. Residents of the local and surrounding communities, as well as members of the press, are welcomed to attend.

The opening of the meditation hall also coincides with an accompanying global group practice, Year Long Meditation, which seeks to heal and empower collective consciousness with a combined goal of 1,000,008 hours of meditation. Like the shrine, Year Long Meditation is open to practitioners of all faiths and backgrounds, connecting each individual’s daily meditation time to a shared intention of dispelling fear and increasing harmony in the world.

The Institute hopes the shrine will serve as a focal point of yoga and meditation, nurturing seekers on all levels and acting as a catalyst to inspire an exponential leap in society’s spiritual evolution.

To learn more about the vision of Year Long Meditation and to join the practice, read the press release and visit www.yearlongmeditation.org. 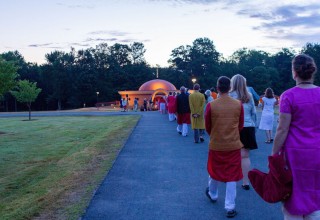 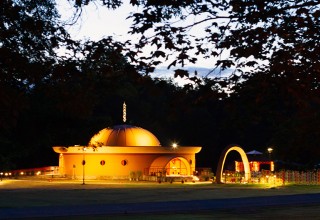 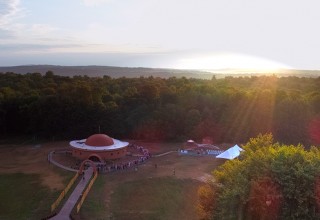 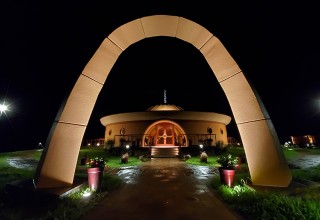 Founded by Swami Rama in 1969, the Himalayan Institute is a leader in the field of yoga, meditation, spirituality, and holistic health—a non-profit international organization dedicated to serving humanity.

Yoga Nonprofit Seeks to Change the World With 1,000,008 Hours of Meditation
With its Year Long Meditation kicking off July 16, 2019, the Himalayan Institute hopes to stoke collective consciousness and create a ripple effect of positive intention worldwide.
Himalayan Institute - May 15, 2019