"A New Science: From Light to Description" by Mukesh Prasad follows the money trail of Climate Change and finds documented evidence that deniers are not supported by big money, alarmists are, and media has been seriously lax about following the evidence 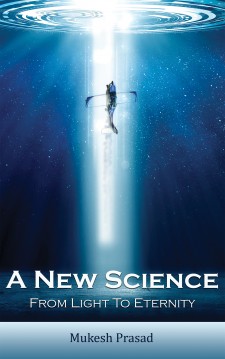 Highlands Ranch, CO, July 28, 2016 (Newswire.com) - ​According to current scientific orthodoxy, manmade carbon emissions will inevitably lead to catastrophic climate change that will threaten life on Earth.  Climate change alarmists hypothesize that atmospheric CO2 absorbs heat, trapping it in the atmosphere and causing global temperatures to rise.  As ever increasing amounts of CO2 are pumped into the atmosphere, this hypothesis states, global temperatures will rise uncontrollably, ultimately causing catastrophic climate change.

Like Galileo’s then-controversial assertion that Earth was not the center of the Universe, Mukesh Prasad’s recently published book A New Science: From Light to Eternity challenges this climate change orthodoxy. Employing sound science, he disproves assertions of alarmists by demonstrating that manmade CO2 emissions are not a threat.  (See some of the references included in Prasad’s proof at anewscienceblog.wordpress.com/.)  However, the science of manmade climate change is only half the story Prasad tells; the other and far more interesting half rests in how the scientific community and media frame climate change and why they do so.

A headline from the online magazine Salon provides a first clue in Prasad’s book, which further delves more deeply into the underlying science . . . and how the scientific community and media present climate change to the public.  The Salon headline was this:  “Koch brothers donated big to ALEC, Heartland Institute.”  (Heartland Institute is what climate change proponents call a ‘denier,’ someone that challenges important aspects of climate change orthodoxy.)

Upon reading the article, Prasad found that “donating big” consisted of a mere $25,000! Further exploration revealed that, while similar small amounts were being donated to other climate change ‘deniers,’ much, much, VERY much more was being donated to research in support of climate change orthodoxy, some even by fossil fuel corporations, who were also, in some cases, themselves making money on alternative energy. Why, then, Prasad asked himself, would media outlets such as Salon find it necessary to mislead readers by describing the relatively small amounts of money being donated to deniers as “big”? If CO2-caused climate change were real, why would such a deception be necessary?

In pursuit of the answer, Prasad explored not only the climatological process involving CO2 emissions but also the cast of characters, in science and the media, that present catastrophic climate change as fact.  He found that an entire industry has sprung up around climate change, one funded by an almost unlimited supply of taxpayer money. In contrast to money donated to so-called climate change deniers, amounts donated to alarmism are astronomical. Well-funded careers within science are based in climate change and climate change headlines sell papers. Meanwhile, real but less glamorous ecological problems, for instance pollution and species endangerment due to human incursion, are left unaddressed and unfunded.

Author of the book A New Science: From Light To Eternity