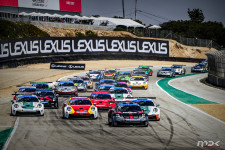 MONTEREY, Calif., May 3, 2022 (Newswire.com) - As MDK Motorsports approaches the midway point of the season, the team and drivers are demonstrating their legitimacy as contenders in the Porsche Carrera Cup. The weekend at Weathertech Raceway Laguna Seca began with pole positions for both Pro driver Trenton Estep and Am driver Mark Kvamme. When the checkered flag was waved, both maintained their current rankings in their respective classes: Estep in fourth and Kvamme in first.

"All in all, it was a really solid weekend for MDK Motorsports," says Team Manager Will Bamber. "Coming away with our first overall pole position was definitely a highlight for the team. Results like that justify all of the work we put in and the performance we are extracting from our cars. While it may not have been everything we hoped for, we're proud of the three podiums we earned, and it bodes well for us as we head to Watkins Glen to hopefully move up the grid."

As the team rounds the curve into the second half of the season, it continues to focus on the partnerships and coordination needed to keep the team in both its series running like a well-oiled machine. "Our thanks go to Porsche Motorsport North America, who has been incredibly supportive of our new team," said Team CEO Megan Kvamme. "In the repair and maintenance of our cars, they have constantly gone above and beyond to make sure our team and drivers' experience and expectations are exceeded. We are excited to continue to partner with Porsche into the future."

MDK Motorsports is competing in their inaugural season in both the Porsche Carrera Cup North America and Porsche Sprint Challenge North America. Operated out of the former racing shop for Meyer Shank Racing, the Central Ohio-based MDK Motorsports team is led by team owner and driver, Mark Kvamme alongside his wife and team CEO, Megan Kvamme.

Interviews, quotes, and images are available.