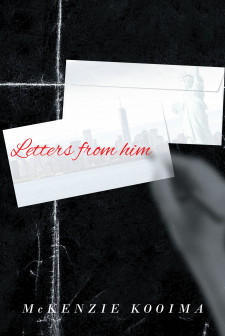 SIOUX FALLS, S.D., October 21, 2021 (Newswire.com) - Fulton Books author McKenzie Kooima, a brilliant author, has completed her most recent book "Letters from Him": an engrossing read that talks about how a bunch of letters Kenna and her best friend found have led them to a secret facility in New York. As they follow the clues and get entangled in danger, will Kenna also find her father's whereabouts?

Kooima shares, "When mysterious letters arrive the summer before her senior year, Kenna, the daughter of an alcoholic single mother, follows the riddles within that hint at her absent father's existence. Kenna, with the help of her best friend, Jake, head to New York City using each letter as their tour guide. The rabbit hole leads them to a family she didn't know she had, as well as a secret government medical testing facility. Kenna becomes an unwilling test subject herself as she searches for her father and his reasons for leaving her mother. Join Kenna and Jake as each new letter reveals a truth from both of their pasts. As their quest turns into a lab experiment gone wrong, Kenna must dig into her father's past to save not only herself but her family as well."

Published by Fulton Books, McKenzie Kooima's book is a brand-new novel that contains a tale of searching for the truth and unveiling the past.

This novel brings a twist to a long-lost form of communication as characters discover letters and the danger they could hold.

Readers who wish to experience this excellent work can purchase "Letters from Him" at bookstores everywhere, or online at the Apple iTunes Store, Amazon, Google Play or Barnes & Noble.

Giuseppe Di Loreto's New Book 'Fun With Grandpa' is a Fascinating Collection of Short Stories That Cater to the Innocence of Childhood and Old Age
Fulton Books - Dec 7, 2021

Jennifer Lahr's New Book 'What is Worth?' is a Transformational Read That Aims to Improve One's Outlook and Appreciation of Self
Fulton Books - Dec 7, 2021
Newswire