Maura Walsh's New Book "Through My Eyes: A Story of a Teenage Female at War" Is the Author's Experiences as a 19 Year Old Female Soldier Sent to War Straight From Boot Camp.

Newest publication "Through My Eyes: A Story of a Teenage Female at War" from Fulton Books author Maura Walsh is a chronicle of being in the Third Infantry Division to cross the threshold into Iraq during Operation Iraqi Freedom in 2003. 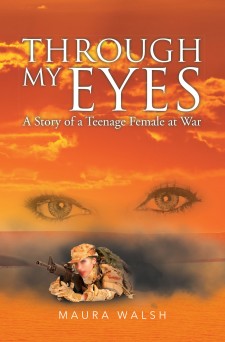 New York, NY, April 18, 2016 (Newswire.com) - Maura Walsh, a US Army vet and a current Administrative Contracting Officer, has completed her most recent book “Through My Eyes: A Story of a Teenage Female at War”:  a riveting first-hand account of a young woman sent to war without the anticipation of returning home.

Maura Walsh says, “My wish is to share my experience of a female at war not only with myself but an entire country.”

Published by Fulton Books, Maura Walsh’s book shares the author’s experience as a 19 year old female soldier, sent straight to war without ever unpacking her bags from basic training. She was 3rd Infantry Division 7th Cavalry based out of Fort Stewart, Georgia; the first of the Army to cross the threshold into Iraq during Operation Iraqi Freedom in 2003. She, along with 480 men, were sent off to war not believing they would ever return back home.

This is a story of battered innocence, thrill, shock, torture, sexism and war. Being in the middle of the desert with little to no support, the odds were all against US Forces. It was the Iraqi’s terrain, the Iraqi’s resources with unlimited supply of ammo. It was the perfect recipe for a massacre.

Readers who wish to experience this engrossing work can purchase “Through My Eyes: A Story of a Teenage Female at War” at bookstores everywhere, or online at the Apple iTunes store, Amazon, Google Play or Barnes and Noble.

Tags: Fulton Books, Maura Walsh, New Books, Through My Eyes: A Story Of A Teenage Female At War

D. Bhandari's New Book 'A Day With My Babysitter Cindy' Displays the Beautiful Relationship of a Little Child and a Babysitter
Fulton Books - May 22, 2020
Newswire