The study will research injecting engineered particles into the rocket plume of a hovering lunar lander to instantaneously solidify the soil below, creating a landing pad. 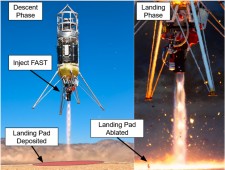 “Engine plumes kick up lunar regolith (soil) during landing which can cause significant damage to the spacecraft as well as the surrounding environment and infrastructure,” said Matthew Kuhns, chief engineer of Masten. “In the case of larger rockets, you can even kick regolith up into lunar orbit!”

Masten’s in-Flight Alumina Spray Technique (FAST) aims to create ‘instant landing pads’ beneath the lander as it descends. FAST uses engineered particles, injected into the rocket plume, to build up a coating over the regolith at the landing location over approximately 15 seconds of hover time. The hardened regolith would enable landers to safely set down without the risks posed by engine plume effects, allowing landings in relatively close proximity to other assets and without the need for pre-existing infrastructure.

The team will spend the next nine months investigating how FAST would benefit Artemis moon landings which will land the first woman and the next man on the lunar surface. Co-investigators include Dr. Phil Metzger of University of Central Florida’s Florida Space Institute, and Kris Zacny of Honeybee Robotics.

“We were working on a plume cratering study with NASA and Dr. Metzger, and so I started brainstorming ideas around ways you could land without needing a precursor mission to create landing pads,” continued Matthew Kuhns. “Lots of crazy ideas later, FAST stood out as the best option, by far.”

“This may or may not work,” continued Sean Mahoney. “But the only way to find out is to do the research so we can better understand how to address technical challenges. It is critical to the big feats of the future that rigorous investigation into new options is supported, and we’re thankful that NASA is a great partner in helping develop these innovations.”

About Masten Space Systems
Mojave, California based Masten Space Systems was founded in 2004 by CTO David Masten and is focused on reusable rocket technology, driven by the goal of enabling space transportation and providing reliable planetary landers for the Earth, Moon, Mars, and beyond. Masten is lowering the barriers to space access through their core technology of re-usability. The company sees a future where rocket flights are so commonplace they’re boring.