Massachusetts Small Business Defaults Up in June, as is Borrowing 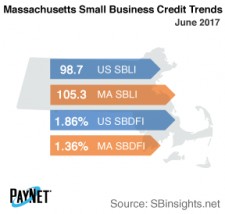 Chicago, IL, August 9, 2017 (Newswire.com) - A greater number of Massachusetts' small businesses defaulted on existing loans and the level of borrowing activity increased in June 2017, data released by PayNet illustrate. The indices suggest that financial conditions in the state may weaken.