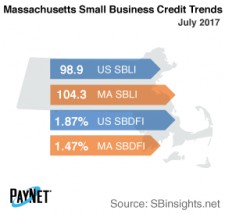 Chicago, IL, September 20, 2017 (Newswire.com) - PayNet, the leading provider of small business credit data and analysis for the commercial and industrial lending industry, announces that in July 2017 the percentage of Massachusetts' small businesses defaulting on existing loans has increased. Of the 18 major industries, defaults worsened in 10 and improved in 8 in the state compared to last month.

The PayNet Small Business Lending Index (SBLI) for Massachusetts registered at 104.3, surpassing the national SBLI level (98.9) despite falling by 0.5% from last month's state level. The Index is basically unchanged from a year ago.