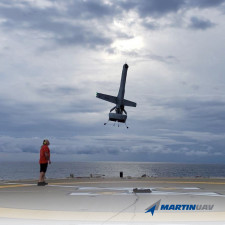 PLANO, Texas, November 10, 2020 (Newswire.com) - Martin UAV successfully demonstrated the shipboard integration of its V-BAT as well as its impressive maritime capabilities in support of United States Southern Command's (SOUTHCOM) counter narcotics operations in the Eastern Pacific from Oct. 6, 2019 to July 31, 2020.

Support for the mission included the highly visible Enhanced Counter Narcotics Operations that began April 1, and was kicked off by the President of the United States.

By leveraging commercial off-the-shelf technologies, LD2's goal is to enhance the execution of the Department of Defense's strategic objectives. Over the course of the demonstration, the V-BAT flew an unprecedented 273 sorties for a total of 1340.7 flight hours.

Martin UAV is a private, advanced technology company based in Plano, TX. The company specializes in building wholly-unique, unmanned aircraft systems and associated flight control software. The company's systems are commercially developed to fill critical operational needs in tactical & confined operational environments. Its V-BAT series aircraft is the only single-engine ducted fan VTOL that has the ability to launch & recover from a hover, fly 8+ hours in horizontal flight, and make mid-flight transitions to "hover & stare" at any time throughout a given mission set. For more information visit: martinuav.com.