Martin Terrell's New Book 'You're Only Innocent Once, and Once is Not Enough' is a Great Narrative About a Black Man's Life With a Prison Record and Denied Innocence 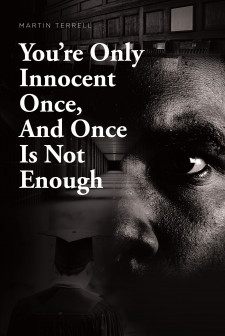 CHAPEL HILL, N.C., September 3, 2021 (Newswire.com) - Fulton Books author Martin Terrell has completed his most recent book "You're Only Innocent Once, And Once Is Not Enough": an engrossing and true story of danger, innocence, and new beginnings, where a man is wrongly convicted of a crime and fails to speak their truth.

You Are Only Innocent Once, and Once Is Not Enough shows how one man manages to break free of the recidivism cycle and maintain his freedom by going to college while in prison and achieves unparalleled success after his release.

A former drug abuser and ex-felon, Martin Terrell is arrested for a crime he didn't commit and sentenced to six to twenty-five years in prison. His claims of innocence are dismissed by all who know him because of his past record. Forced to face the injustice alone, he vows to write a new life story, one that no longer fits the story he'd written as a youth in Cincinnati.

The rest of the book follows Martin's new script as it unfolds through graduate school at OU and his following career. He becomes the coauthor of a textbook while still a master's student. After working for two years as a member of Ohio University's development office, he is appointed the assistant dean for development in the College of Arts and Sciences. With stops at Florida State University and eventually the United Negro College Fund, he becomes his own man as the vice president and campaign manager for development at Stony Brook University in New York.

In this age of civil unrest with its focus on civil injustice and an unjust criminal justice system, You Are Only Innocent Once, and Once Is Not Enough offers a strand of redemption. The story of a man unfairly stripped of his freedom, primarily because he's black and has a previous record, contains all the elements that are under assault for criminal justice reform and penal reform. Martin's use of education to win a victory over that injustice gives us a success story that anyone can identify with.

Published by Fulton Books, Martin Terrell's book is an incredible read that follows a tragic start which turns into a beautiful ending as the man journeys towards freedom.

This book also provides insight on the unfair criminal justice system that contains the power to drag down innocents and lets the guilty roam free. With this man's life story, it brings to light the injustice and flawed system of the nation and sheds hope that truth and success ultimately wins in the end.

Readers who wish to experience this gripping work can purchase "You're Only Innocent Once, And Once Is Not Enough" at bookstores everywhere, or online at the Apple iTunes Store, Amazon, Google Play or Barnes & Noble.

Tags: Fulton Books, Martin Terrell, You're Only Innocent Once And Once Is Not Enough

Dr. Thomas Newman's New Book 'Friends in the Garden' is a Detective Adventure of a Boy and His Dog as They Search for the Culprit of the Missing Vegetables
Fulton Books - Oct 21, 2021

Eric T. Smith's New Book 'Driving Around' is a Heartwarming Adventure That Highlights the Significance of One's Youth to Their Whole Being
Fulton Books - Oct 21, 2021
Newswire