Martin A. Lessem's New Book "A Cloud in the Desert: A Steven Frisk Novel" is a Sensational Tale of One Man's Race Against Time to Stop World War III From Beginning. 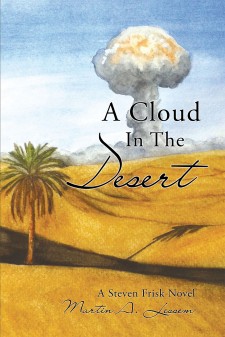 New York, NY, April 5, 2017 (Newswire.com) - Martin A. Lessem, a proprietor of The Royal Manticoran Navy (a science fiction fan association), amateur ballroom dancer, and accomplished amateur pilot, has completed his most recent book “A Cloud In The Desert: A Steven Frisk Novel”:  a gripping and fast paced story of international intrigue and shady secret societies.

Published by Fulton Books, Martin A. Lessem’s book opens during a combustible time in the Middle East where the tiniest spark can send Afghanistan and Pakistan to war. Steven Frisk is an operations officer with the Central Intelligence Agency, and it is his job to ensure that this doesn’t happen.

Together with his protégé, Steven must find a way to prevent an all-out war between these two countries, which would destabilize the region further. All the while, the shady Invictus Corporation is playing a dangerous game of its own. Can Steven unravel the truth before the world comes crashing down around him?

Readers who wish to experience this thrilling and unrelenting work can purchase “A Cloud In The Desert: A Steven Frisk Novel” at bookstores everywhere, or online at the Apple iTunes store, Amazon, Google Play or Barnes and Noble.

Andrew Jackson's New Book 'Free My Son!' is a Compelling Read About a Father's Call for Freedom
Fulton Books - Jan 22, 2021

Wendel Lucas Washington's New Book 'Dangerously Safe' is a Poignant Narrative About the Endless Twists and Turns Down the Ragged Road of Life
Fulton Books - Jan 22, 2021