Marijuana by the Numbers: What Do Pasadena Teens and Parents Need to Know?

Volunteers from the Church of Scientology Pasadena and the Los Angeles chapter of Foundation for a Drug-Free World invite concerned residents to join them Saturday in a drug prevention initiative to bring the truth about marijuana to local teens and parents. 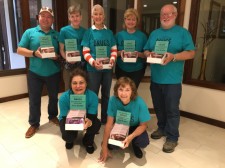 PASADENA, Calif., June 1, 2018 (Newswire.com) - Volunteers handed out more than 10,000 copies of "The Truth About Marijuana" booklets in downtown Pasadena Saturday, May 20. They plan to blow this away this weekend. Anyone wishing to help is invited to be at the Church of Scientology Pasadena at 35 S. Raymond Ave. at 10 a.m. Volunteers will place sets of the booklets in local shops to make them readily available to the entire community.

Why should one be concerned?

6 reasons the volunteers have launched this initiative:

1. According to the U.S. Centers for Disease Control and Prevention, “...research shows that about 1 in 6 teens who repeatedly use marijuana can become addicted, which means that they may make unsuccessful efforts to quit using marijuana or may give up important activities with friends and family in favor of using marijuana.”

2. According to a 2016 article in The New York Times by Robert L. DuPont, president of the Institute for Behavior and Health and first director of the National Institute on Drug Abuse, “most heroin users initiated their drug use early in their teens, usually beginning with alcohol and marijuana.” It also states: “People who are addicted to marijuana are three times more likely to be addicted to heroin.”

3. Much of what teens hear about drugs actually comes from those selling them. Former drug dealers admit they would tell people anything to get them to buy drugs.

4. According to the National Institute on Drug Abuse: “Substantial evidence from animal research and a growing number of studies in humans indicate that marijuana exposure during development can cause long-term or possibly permanent adverse changes in the brain.”

5. There are over 400 chemicals in marijuana and hashish. The chemical that causes intoxication or the “high” in users is called THC (short for tetrahydrocannabinol). The pot smoked at Woodstock in 1969, and pot consumed through the 1970s and as late as the early 1980s contained roughly 1 percent of THC. By 1997, the average THC content had risen to nearly 5.1 percent; by 2008, it doubled, averaging 10.2 percent. In a study published in 2017 in coordination with the National Institute on Drug Abuse, National Institute of Health and Department of Health and Human Services, by 2014, the average potency of marijuana had increased to 12 percent. The study concluded that “the increase in potency poses higher risk of cannabis use, particularly among adolescents.”

6. National Institute on Drug Abuse states frequent or long-term marijuana use is linked to school dropout and lower educational achievement.

“These are only some of the facts people know about marijuana,” says Karla Bartholomew, Public Affairs Director for the Church of Scientology Pasadena who helped organize the drug prevention activity. “We are handing these booklets out because not knowing the truth about drugs can be deadly.”