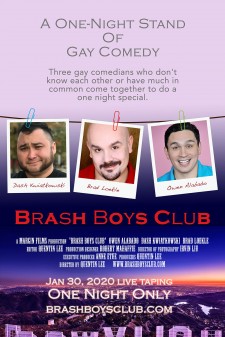 BRAD LOEKLE was a semi-finalist on season 9 of NBC’s Last Comic Standing, and TV audiences will recognize him from his eight seasons on the hit TruTV series, World’s Dumbest. Logo featured him in their 2016 Aspen Comedy Special. And Brad’s made guest appearances regularly on an assortment of shows on VH1, MTV, LOGO, E!, and many more. He was a writer for Fashion Police and has performed in over 70 countries around the globe.

OWEN ALABADO is "The Straight Gay" Comic who has headlined at Flappers Comedy Club, The Icehouse, and The Michigan Gay and Lesbian Comedy Festival in Detroit. For the past two years, he has had an ongoing show at Flappers Comedy Club called "Owen and Friends".  He recently performed in his hometown in Wisconsin to a sold-out, 300-seat theater. He has appeared in TV shows such as "This Is Us", "Shameless" and the comedy "*Loosely Exactly Nicole". He is also the writer/creator of the award-winning web series "Dudes", a comedy based off of his comedy and personal life. "Dudes" has won eight awards, including "Best Web Series Pilot" for the Austin Indie Fest, "Best Webisode" for the Hollywood Boulevard Film Festival, and "Best Web Screenplay" for the Canadian Diversity Film Festival. He is also in the development of producing a new Filipino-based comedy series called the "Flipside". Owen brings the funny, pulling from his life: from being a gay guy who hangs out with a bunch of straight guys, a half Filipino half Caucasian, as well as a singing-dancing trained martial artist who goes to about five to eight weddings a year!

DASH KWIATKOWSKI (they/them) is a New York-based stand up and podcaster. They're a non-binary Sadboi and a big ol' queer. They play Dungeons and Dragons as part of a podcast called Lost in the Multiverse (dnd.cool), and they tour all over this terrible country telling jokes at strangers. They've performed in Limestone Comedy Fest, 208 Comedy, SF Sketchfest, and SF Comic-Con. They're the leader of the Bummer Club and the Queen of Strong Style, and you didn't hear this from me, but they might have a big crush on you.

The show opener is BRIDGET McMANUS, a television host, screenwriter, producer, director and award-winning performer. She created and hosted two television shows for the Logo Network: the award-winning comedy talk show, Brunch with Bridget, and Bridget McManus Presents: That Time of The Month. McManus is one of the few female warm-up comedians in television, and her credits include the Emmy Award-winning The Real, Netflix's Tiffany Haddish Presents: They Ready, Fox's sitcom Patty's Auto, The Teen Choice Awards, NBC's The Wall and Last Comic Standing, etc.

Please note that this is a live taping, so come early and be prepared to laugh. Beer and wine are available for purchase. Tickets link: http://brashboysclub.com