Many Faiths Join in a Walk of Peace

The fourth annual United Faiths Walk of Peace brought together many faith communities of Pinellas County to increase understanding and cooperation. 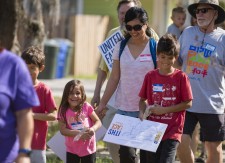 DUNEDIN, Fla., March 28, 2019 (Newswire.com) - In an expression of mutual respect and unity, members of the broad spectrum of Pinellas County faiths gathered at the Taoist Tai Chi Society in Dunedin, Florida, for the fourth annual United Faiths Walk of Peace.

They walked to Pioneer Park where religious leaders of the five cosponsoring faiths—Scientology, Baha’i, Judaism, Islam and the Religious Society of Friends (Quakers)—shared their common goal of peace as expressed in their diverse faith traditions. The Scientologists spoke of their belief in the importance of communication in fostering peace. In 1960, Scientology Founder L. Ron Hubbard wrote, “On the day when we can fully trust each other, there will be peace on Earth.”

Rev. Becky Robbins-Penniman, pastor of the Episcopal Church of the Good Shepherd, began United Faiths Walk of Peace four years ago, inspired by the vision of William Ury, co-founder of Harvard’s Program on Negotiation.

Throughout the afternoon, members of the many faiths represented introduced themselves to one another and learned more about the beliefs and practices of those participating. They created friendships and planned activities to unite the community in the name of peace.

The route included a visit to the Mosque Masjid Al Salaam and ended at First Presbyterian Church of Dunedin for refreshments and networking. 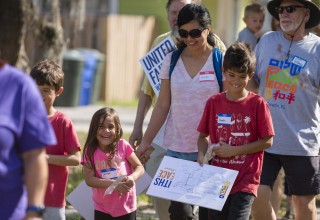 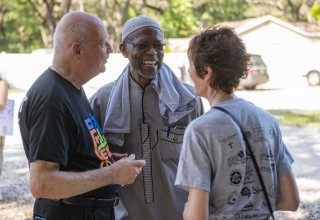 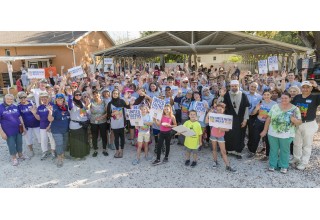