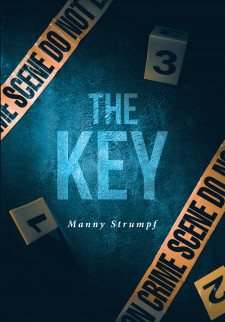 MONROE TOWNSHIP, N.J., May 17, 2022 (Newswire.com) - Fulton Books author Manny Strumpf, a veteran professional communicator who has been an Army public affairs staff person, newspaper reporter, bureau chief, and freelance writer, has completed his most recent book "The Key": The novel is a gripping saga about a federal police officer who finds himself grappling with a case after learning of some letters that were reportedly sent to a New Hampshire resident who helped him solve the theft of a priceless artifact from a federal building in Manhattan.

He doggedly goes on the trail until he finds the answers to a puzzle that has eluded him for months. Several months after former National Park Service Ranger Sarah Higgins helped the United States. Park Police Lieutenant Mike Finnegan identified the perpetrators who stole George Washington's inaugural uniform from a display at Federal Hall on Wall Street. She informed Finnegan that she began to receive the anonymous letters in her mailbox. The first envelope contained only a key. There was no message or return address. Subsequent envelopes, she said, contained hints to the whereabouts of the former government official Joe Kozlewski, who left the state abruptly after confessing that he assisted the perpetrators who committed the crime in the building he managed.

Finnegan, a veteran police officer, ignores the advice of friends and colleagues. He is determined to discover the source of the letters and how they relate to the missing superintendent. He is willing to stake his reputation and career on finding out the true significance of the key. But Finnegan finds dramatic roadblocks at every step. Police, for example, find the body on a downtown Manhattan sidewalk of the mastermind of the theft. Two other persons close to Kozlewski die of suspicious causes. Another possible source of information unexpectedly disappears without providing the post office with a forwarding address, and a fifth suspect sells her house suddenly and leaves town. When a tip finds its way to Finnegan's desk from a kindly parish priest about a parishioner acting strangely, the federal police officer suddenly realizes that he's close to solving the mystery and must act quickly. His hunch proves correct. He requests and secures the cooperation of other law enforcement agencies who track the parishioner to where Kozlewski is hiding. It's not until Sarah Higgins reveals a startling secret about the key, however, that Finnegan is able to finally close the file.

"The Key" is Strumpf's fourth novel.

Readers who wish to experience this great work can purchase "The Key" at bookstores everywhere or online at the Apple iTunes store, Amazon, Google Play or Barnes and Noble.