Manny Soundz is the Coors Light Artist for December 2016 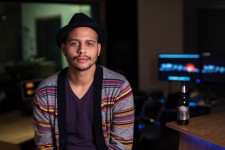 Manny Soundz will be the December 2016 featured artist in the Coors Light “Discover Your Sound” program. Throughout the month, Coors Light will promote new music and behind-the-scenes video footage featuring Manny Soundz across FM radio, streaming audio, social media, and YouTube; the campaign culminates with a live performance in January 2017.

The December campaign will feature Manny’s original song “VAN A ENAMORARTE”, a Pop Ballad of his debut album “POEMA NATURAL,” composed by Isidro iO Santos and released by the Label Villarq Music.

“I’m very grateful to MAX and Coors Light for this opportunity. This is something that every artist wishes to accomplish in their career, and I’m very blessed that I have been chosen,” expressed Manny.