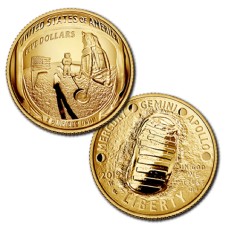 BURNSVILLE, Minn., February 4, 2019 (Newswire.com) - On July 20, 1969, the world sat glued to their television sets. Before their very eyes, man first set foot on the surface of the moon. The footprints, flag, and plaque left on the lunar surface sent an eternal message throughout the cosmos: humanity had finally reached the heavens, and America led the way.

In honor of the 50th anniversary of the Apollo 11 mission, Congress has authorized the minting of special, limited-edition curved commemorative coins—something the U.S. Mint has only done once before in their entire 226-year history!

On the obverse, these curved commemorative coins display the indented footprint left by astronaut Neil Armstrong, along with the names of the space programs that led to such a historic moment: Mercury, Gemini, and Apollo. Flip the coin over, and you’ll see the outward curve of an astronaut’s helmet. This design recreates the close-up photo taken by Buzz Aldrin of Armstrong standing next to the landing module as seen through Buzz’s visor.

A Perfect Grade, a Special Designation and a Hero's Signature
The 2019 U.S. Mint Apollo 11 Commemorative series includes both Brilliant, Uncirculated and shimmering Proof condition coins struck in gold, silver, or silver-clad cupronickel. Each coin is official legal tender in the United States, and each coin offered here comes graded by Numismatic Guaranty Corporation (NGC) in perfect Mint State-70 (MS70) or Proof-70 (PF70) condition—flawless even under magnification!

In addition to a perfect grade, each coin comes certified as First Day of Issue (FDI), meaning the coins were received by NGC for grading within 24 hours of the initial mint release.

Best of all, coins are available sealed with labels bearing the hand-signed signature of astronaut Charlie Duke, who not only served as CAPCOM (Capsule Communicator) for the Apollo 11 mission—meaning he was the voice of mission control for the astronauts—but he later became the youngest person ever to set foot on the lunar surface.

Since 1984, Asset Marketing Services, LLC (AMS) has provided collectors, history buffs & others with the finest numismatic products. Its brands, GovMint.com and ModernCoinMart, combine to make one of the largest direct-to-consumer marketers of coins.