Answer is, Old Timers Day — a virtual TV game and feature film telling the epic tale about the forces of good versus evil, battling it out on the baseball field. 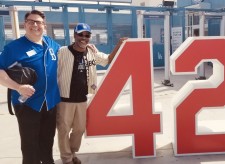 HOLLYWOOD, Calif., May 6, 2020 (Newswire.com) - ​​​​​​​​​​​​​​The Celestial Baseball Association asks the looming question, "What is a world without baseball?" An absence of dramatic anticipation during deep stares from the pitcher's mound, combined with hope of a miracle home run. Between the Corona pandemic causing the Major League Baseball season to be postponed and a scandal that rocked the game, baseball fans are missing the very moments that brought them together over hot dogs, crackerjacks and libations.

In the midst of the madness, Richard LoPresto, President of the CBA and spiritually led author of Old Timers Day, along with pioneer filmmaker Foster Corder, aim to fill a void for fans yearning for that springtime spark. While this pandemic shattered the MLB season, in a strange way it brought about another opportunity for the men to support the game they so love. While actively pursuing financing partnerships for the film adaptation of Old Timers Day, director Corder and LoPresto have proposed a virtual live game with celebrity announcers, using archival baseball footage. In the absence of real MLB play, the creators hope that familiar, electrifying voices of Hollywood royalty can bring color during these grim times as only they can. Recently, the cast of "Hamilton" did something similar to this idea. "Our celebrities would each broadcast from their homes, in accordance with social distancing guidelines." The creators are optimistic that their outreach with popular sports networks will yield fruitful results.

LoPresto and Corder are currently exploring a number of financing options to make the film a reality. They believe the feel-good film would soothe everyone's pain, players and fans alike. LoPresto says, "This is the most exciting baseball game ever played! 2020 is the 100th anniversary of the Negro Leagues, which makes Old Timers Day extremely relevant considering race relations addressed in the book."

The screenplay follows Levi, a ten-year-old who finds his grandfather wrote a book about the greatest game ever played between teams, handpicked by their captains, God and Satan. The illustrious game is played at legendary Ebbets Field in Brooklyn. The legends of baseball, living and dead, are summoned to play the game. The play by play announcers are also the best of all time. He receives a baseball history lesson while being instilled with important life messages of right and wrong.

When LoPresto penned Old Timers Day, he had no idea that a similar scenario would become reality. Houston's sign stealing ignominy during the World Series has shattered the hearts of baseball fans around the world. LoPresto knows this "Home Run can save The Game." He believes this tale, told virtually on television and later on the big screen, would provide the healing and recovery everyone needs. According to LoPresto, "the message of Old Timers Day is one all baseball fans would truly appreciate." LoPresto is a donor for The Negro Leagues Baseball Museum, and the Baseball Hall Of Fame.

With more than 100 IMDb film credits, Foster Corder, a Vietnam veteran, wrote the screenplay and has high hopes for how far the film can reach with the right distribution. He says, "Today's climate offers the perfect arena for this feel-good film that could be as big as Black Panther." He hopes to move forward with experienced producers, familiar with baseball and related films to produce this movie with them.

Old Timers Day: As Told by God to Richard LoPresto is available on Amazon.com.

LoPresto and Corder spoke about the project here.