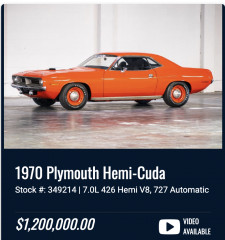 JACKSON, Miss., September 14, 2021 (Newswire.com) - Sonicbidder.com, the world's most interactive online auction, has made a name for itself. The platform helped hype the Ford vs Ferrari movie craze, with its $3.2 Million auction, which saw a 2005 Ford GT beat a 1987 Ferrari 328 GTS to set the stage. In 2020, Sonicbidder.com hosted the now annual Hershey At Home auction in the wake of the canceled Hershey Auction. Adding to the $5.6 Million in sales was an Amelia Island award-winning 1929 Rolls Royce Phantom I York, which sold for over $500,000.

JD Pass, the owner of TheVaultMS.com, LLC, has catapulted Sonicbidder.com to the preferred auction platform for his collection. Together they've garnered impressive automotive sales. Among those sold were a 1957 Chevrolet Bel Air, a 1967 Ford Mustang Fastback, a 1963 Split Window Chevrolet Corvette, and many others. Other established collector car connoisseurs have partnered with the Sonicbidder.com platform. Long-time known car enthusiast Steven Plaster, owner of Evergreen Historic Automobiles, recently said, "We've sold some of the rarest and finest cars in the world. Sonicbidder.com has given me an opportunity and I want to say, 'Thank You.'" Other giants in the collector car world like the Audrain Auto Museum, Nobles Family Auto Museum, Gentry Lane, Cars Remember When, and more are joining Sonicbidder.com daily.

Sonicbidder.com shakes the industry again, selling the lowest mileage Hemi Cuda on the planet ahead of its Muscle Car Madness auction. The "True Grit" 1970 Plymouth Hemi Cuda was special-ordered new at Shreves Plymouth-Dodge in June of 1970 by Bill Reardon from West Virginia. He was buying his dream car at 62 years of age. Tor-Red exterior with black interior. Reardon immediately began modifying True Grit to be drag strip ready, removing many original, factory parts. He replaced them with the best performance parts available, while carefully storing the originals. Sadly, Reardon only raced one season before passing away. In 1977, his son sold the car and the original parts to Marvin Dillion, who returned it to its original configuration at 42 miles. It was driven less than a mile in the years he owned it. Since then, it was moved enough to take the odometer to its present reading of 86 miles. Today, it's a time capsule: unmolested, original, and superb verification of the numbers and codes.

Sonicbidder.com is bringing a three-week sprint of auctions for the Fall Season. These online-only auctions include some of the most sought-after classic, muscle, exotic, racing, and Formula 1 cars.