Louisiana Small Business Defaults Down in October, Borrowing Up - PayNet 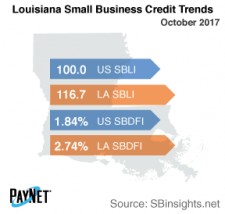 CHICAGO, December 18, 2017 (Newswire.com) - The percentage of small firms defaulting on loans has fallen in Louisiana and the level of borrowing activity rose in October 2017, data reported by PayNet illustrate. The data suggest that financial conditions in the state may significantly improve based on their longer-term trends.

Transportation and Warehousing (6.21%); Mining, Quarrying, and Oil and Gas Extraction (5.05%); and Construction (4.49%) registered the highest default rates of all industries in Louisiana. Nationally, Transportation and Warehousing had a default rate of 4.38%, with a difference of +0.17% compared to the prior year, while Louisiana had a variance of -0.02%.

At 116.7, the PayNet Small Business Lending Index (SBLI) for Louisiana increased 1.5% from the previous month's state level and was 16.7% greater than the national SBLI level of 100.0 this month.

"Strong financial health and rejuvenated investment mean Louisiana is well positioned for a positive lift in the economy," states the president of PayNet, William Phelan.