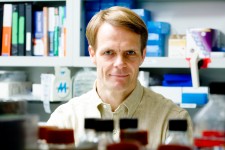 SAN FRANCISCO, CA, July 20, 2017 (Newswire.com) - Lorenz P. Studer, MD, was announced today as the winner of the 2017 Ogawa-Yamanaka Stem Cell Prize by the Gladstone Institutes. Studer is the director of the Center for Stem Cell Biology and a member of the Developmental Biology Program at the Memorial Sloan Kettering Cancer Center.

A distinguished stem cell biologist, Studer was selected for his transformative contributions to the field of cellular reprogramming and the application of human induced pluripotent stem cells (iPSCs) to human disease. His groundbreaking research has advanced the therapeutic potential of stem cell­–based therapies in Parkinson’s disease and other neurological disorders.

“Dr. Studer’s visionary approach has revealed the mechanisms underlying several human neurological disorders,” said Deepak Srivastava, MD, a member of the selection committee, and director of the Roddenberry Stem Cell Center at Gladstone. “His perseverance over the past few decades led to the development of a cell-based therapy for Parkinson’s disease. He is now moving his findings into clinical trials, which could help treat millions of patients suffering from this devastating disease.”

“I am honored to receive this prestigious prize in regenerative medicine, the topic that has been the focus of my scientific career,” said Studer. “I believe that regenerative medicine holds the key to helping people with neurological disorders, and I’m hopeful that my research will translate into real clinical applications in the near future.”

Studer was selected from a pool of outstanding nominees by an independent committee of stem cell experts. The committee was composed of George Daley, MD, PhD, dean of Harvard Medical School; Hideyuki Okano, MD, PhD, dean of the School of Medicine at Keio University; Deepak Srivastava, MD, director of the Gladstone Institute of Cardiovascular Disease and director of the Roddenberry Stem Cell Center at Gladstone; Marius Wernig, MD, associate professor at the Stanford Institute for Stem Cell Biology and Regenerative Medicine; and Shinya Yamanaka, MD, PhD, senior investigator at Gladstone and director of the Center for iPS Cell Research and Application at Kyoto University.

A ceremony will be held on November 16, 2017, at the Gladstone Institutes in San Francisco, California. Studer will give a scientific lecture and will be presented with the award, along with an unrestricted prize of $150,000 USD. The lecture and ceremony will be streamed live on Gladstone’s website, Facebook page, and YouTube channel. Register for the live webcast in advance on Gladstone’s website.

About Lorenz P. Studer
​Lorenz P. Studer, MD, is the founding director of the Center for Stem Cell Biology and a member of the Developmental Biology Program at Memorial Sloan Kettering Cancer Center. He is also leading a multidisciplinary consortium to pursue the first clinical application of human stem cell–derived dopamine neurons for the treatment of Parkinson's disease. A native of Switzerland, he received his MD and PhD from the University of Bern, where he co-developed the first cell-based therapy for Parkinson's disease in the country. He then trained as a postdoctoral fellow with Ron McKay at the National Institutes of Health, where he pioneered the therapeutic application of neural stem cell–derived neurons in models of neurodegeneration. In his laboratory at Memorial Sloan Kettering, he established techniques to turn human iPSCs into diverse cell types of the nervous system. He was among the first to realize the potential of patient-specific stem cells in modeling human disease and in drug discovery. Studer's work has been recognized by numerous awards, including the Louise and Allston Boyer Young Investigator Award and the Annemarie Opprecht Award. He was also named a MacArthur Fellow of the MacArthur Foundation.

About the Ogawa-Yamanaka Stem Cell Prize
The Ogawa-Yamanaka Stem Cell Prize recognizes individuals whose original translational research has advanced cellular reprogramming technology for regenerative medicine. Supported by the Gladstone Institutes, the prize was established in 2015 through a generous gift from Hiro Ogawa. It honors the memory of Betty Ogawa and continues the philanthropic legacy she shared with her husband of 46 years. It also recognizes the importance of iPSCs, discovered by Gladstone Senior Investigator and Nobel laureate Shinya Yamanaka, MD, PhD.

The inaugural prize was presented in 2015 to Masayo Takahashi, MD, PhD, for her trailblazing research that led to the first clinical trial to use iPSCs in humans. The 2016 prize was awarded to Douglas Melton, PhD, for pioneering methods to treat diabetes with stem cells.

About the Gladstone Institutes
To ensure our work does the greatest good, the Gladstone Institutes focuses on conditions with profound medical, economic, and social impact—unsolved diseases. Gladstone is an independent, nonprofit life science research organization that uses visionary science and technology to overcome disease. It has an academic affiliation with the University of California, San Francisco.