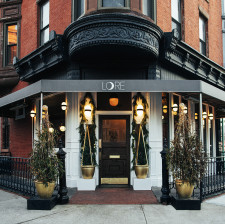 BROOKLYN, N.Y., February 10, 2022 (Newswire.com) - Park Slope gets a new chef-driven restaurant as LORE opens its doors to the public on Feb. 7, 2022. In the highly coveted corner location of 7th Avenue & 15th Street, chefs and partners Jay Kumar and John Kim venture into culinary storytelling with a seasonal menu that highlights their diverse backgrounds.

In their vision, the future of food is seen through the lens of community, with ingredients sourced from regional farms; flavors and techniques of diverse origin that are skillfully woven. Brooklyn is truly a confluence of cultures, kept vital by storytellers and community leaders, many of whom hail from far-flung places around the globe. So many of these diverse traditions are both preserved and born around a dinner table with friends and neighbors.

LORE is a deep consideration of what is considered "local," and a haven for a multitude of cultural stories to thrive through the enduring power of food and spirits to unite us. Featuring a seasonal menu and full cocktail and wine program, LORE will be accepting reservations through its website and RESY.

Chef Jay Kumar is partner and chef at LORE, known for his namesake restaurant Jay's in Basel, Switzerland. In operation for over 20 years, Jay's was a mainstay for Art Basel galleries and international artists. Born in Mangalore, India, and raised in Oman, Kumar studied hospitality in Switzerland before opening his first restaurant, where he built a reputation for the depth and complexity of his progressive Indian cuisine. Now based in Brooklyn, Chef Kumar has integrated a seasonal approach to his menus, building relationships with regional farms in the Hudson Valley.

John Kim is partner and chef at LORE. Prior to partnering with Chef Jay Kumar, he was the opening Chef de Cuisine of the Equinox Hotel as well as Electric Lemon. John also helmed the kitchen at The Finch as Chef de Cuisine, where under his tenure of two years maintained a Michelin star. He received his formal education from The Culinary Institute of America and trained in Michelin-starred restaurants in New York City. John grew up cooking alongside his mother and keeping in touch with his Korean culture, an aspect of his upbringing that inspired him to pursue a career in hospitality.