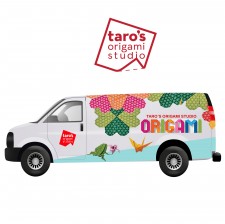 PARK SLOPE, N.Y., August 6, 2020 (Newswire.com) - Taro's Origami Studio, based in Park Slope, Brooklyn, was founded 10 years ago as a hub for expanding origami to the world and is the only origami studio in the U.S. It has been teaching folders of all ages, as well as serving the needs of businesses across the country and beyond.

But, during this pandemic, as everyone has struggled to find ways to connect, entertain, and grow, the origami studio has been closed to help keep its community safe. In the face of a pandemic, teaching groups of people origami indoors is simply not an option.

So with that in mind, this one-of-a-kind company has decided to take the difficult step of closing down its studio at the end of August, but this isn’t the story of another small business falling to the pandemic. During the last few months, origami has actually become quite popular. In fact, even though the physical studio has been closed, lessons for​ online classes and paper sales have increased by about five times compared to last year.

Now, after months of planning, Taro’s Origami Studio is now ready to announce its vision forward: the creation of a brand-new Mobile Origami Studio.

Now, instead of visiting retail locations in person, the studio can go to people and offer lessons, events, classes, and sales in safe environments throughout New York City and beyond to fulfill the larger demand for paper-folding.

It is an exciting chance to expand and help not just Park Slope, but also the under-served areas of NYC.

Inside the Mobile Studio, there will be:

In order to promote this project, Taro's Studio started a crowdfunding campaign at Indigogo on Aug. 1. The campaign will help this unique studio survive and expand its love of origami across the country.