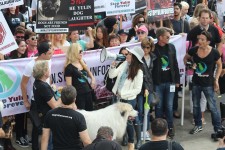 Los Angeles, California , June 23, 2017 (Newswire.com) - The Vanderpump Dog Foundation is heartbroken at the recent videos and images coming from Yulin of the Yulin Dog Meat Festival. The government ban, reported by multiple reliable sources, to end the slaughter of dogs and cats during the Yulin Festival has not been as effective as we had hoped. We are steadfast in our fight to end this barbaric celebration of torture and we know that this battle is not just one that will be fought during the Festival, but one that is a daily fight until we can end these atrocities. The Vanderpump Dog Foundation has ties to the activists on the ground during the Festival, and year-round in China, and we will be supporting them remotely. These activists are risking their lives to stop the atrocities against man’s best friend and to finally put an end to the abuse, and we applaud their efforts and bravery.

Our communication and affiliation with several organizations, and our own Chinese activists, have reassured us that we have a large contingent of activists working on the ground to continue to combat this horrific event. They are reporting these matters and continuing their efforts to surround and stop the animal transport trucks from entering Yulin.

The Vanderpump Dog Foundation is continuing its own initiatives to end this Festival and to bring global awareness to the cruelty cats and dogs are exposed to daily. The Foundation is authoring a World Health Report titled "Public Health Risks posed by the Dog Meat Trade in China and select Asian Countries." The report will inform and educate consumers, authorities, activists and governments globally about the health risks presented to consumers participating in the consumption of both cat and dog meat. Dr. Sessa, Executive Director of the Foundation, stated “it is critical that we educate the world on not only the cruelty these poor animals are suffering, but the health risk to the consumers in eating this meat in their daily diets.” He continued by saying, “I am honored to be participating in this movement and to have the opportunity to use my hands-on experience and education to inform others about the risk they are exposing themselves to by eating dog and cat meat.”

The Vanderpump Dog Foundation is in the final stages of producing their documentary titled “The Road to Yulin and Beyond”. This documentary sheds light on the events taking place in Yulin, as well as presenting a brief history of the dog and cat meat trade in China. The documentary exposes the brutality, stress and daily cruelty toward not only the animals but also the activists that are putting their lives at risk to win this battle. The documentary is anticipated to be available to the public later this year and will hopefully gain global distribution simultaneously.

In contrast to what is currently happening in Yulin, The Vanderpump Dog Foundation is holding their annual “World Dog Day” this coming weekend in Los Angeles, California to celebrate man’s best friend, as well as encouraging people to come together for a moment of silence for those lives lost at this year’s and past years’ Yulin Dog Meat Festival. Last year this event brought together over 5000 attendees and will hopefully exceed those numbers this year.

The Vanderpump Dog Foundation is heading into this year’s Festival in full force. Founder Lisa Vanderpump reiterated this by stating that, “We are in it to win it. Through our year-round campaign to end the barbarity, we have had 1500-person demonstrations with placards and media, we’ve lobbied several times to Congress on our House Resolution 30 and had our efforts highlighted on large platforms like Dateline NBC, Real Housewives of Beverly Hills and more.  While we feel our efforts over the past two years have greatly decreased the number of killings during the Festival, we have not put an end to it yet. We will continue to raise awareness, participate in new bills and save as many lives as we possibly can until we see an end to the atrocities in Yulin once and for all. There is still more work to do, but we are positive that we can affect real, lasting change.”