Lionel B Breaks YouTube Record and Announces Debut Release of Album 'The Lionel B Show Vol. 1'

With powerful bars, addictive choruses, stellar instrumentation and one anthem after the next, Lionel B introduces The Lionel B Show. 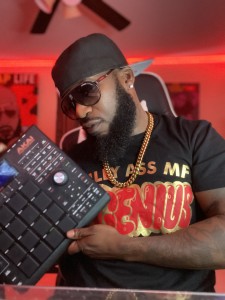 TAMPA, Fla., September 22, 2020 (Newswire.com) - One of 21st-century hip-hop’s newest and strongest contenders, popular YouTuber/rapper Lionel B unleashes his anxiously awaited single "The Way It Used To Be", featuring Papa Duck, leading up to his album release “The Lionel B Show Vol. 1”.

The well-known YouTuber, who went viral over 80 times on YouTube and released the most viewed celebrity news video, trades bars with Florida-based rapper Papa Duck, with them paying homage to yesteryear. In addition to support from Hip Hop Weekly and more, ThisIs50.com proclaimed it “a summer anthem.” The Lionel B Show also notably includes “Man of The House”, a smoothed out and laid-back track, and “High Life”, which has been touted by The Source and more.

The Lionel B Show features an all-star tracklist of music production, and most of the songs are produced by Lionel B. This blockbuster concludes with the inclusion of his “Top of The World” and “Stuck In The Game” tracks, which really display his lyrical genius, mixed with blockbuster production.

Having an extensive music production background, Florida-born and Tampa-based Lionel B has transformed from just a viral celebrity news personality into an awe-inspiring hip-hop force fueled by clever bars, infectious hooks and brutal honesty. After making his massive imprint on YouTube and gaining more than 335,000 subscribers in just a year and a half, he caught the attention of many industry rap icons and movie stars. His content has been shared thousands of times, putting his views beyond 82 million. Of those shares, Lisa Raye-Smith shared his touching video on her Facebook page as well. Lionel B is on course to bring a new voice into the music industry with his standout album. After losing his mother to COVID-19 in July of 2020, she passed just three days after a positive diagnosis from the deadly virus. This tragic loss inspired him to also develop a company creating alternatives to Lysol due to the worldwide shortage. Now, he is reaching for perfection on his 2020 full-length debut album The Lionel B Show.

Connect With Lionel B

About The Lionel B Show