How important is the usage of inclusive language to language learners? 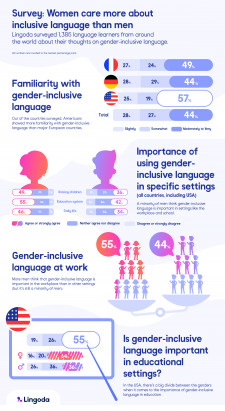 MIAMI, June 2, 2022 (Newswire.com) - Lingoda, the leading online language school, recently released a new report on inclusive language learning. For this comprehensive study, Lingoda collected quantitative data from 1,385 language learners to measure the importance of learning inclusive language when learning a new language. The Lingoda study found that people's awareness of gender-inclusive language and how much importance they place on it can vary by gender, country and situational context. The following highlights some of the most interesting findings from the report.

Women are overall more familiar with gender-inclusive language than men

Respondents who identify as female indicated that they are more familiar with gender-inclusive language than respondents who identify as male. Female respondents also place greater importance on it, in some aspects with significant differences. The difference between gender is greatest (14 percentage points) when it comes to raising children (49% women, 35% men), followed by 13 points difference within the education system (55% women, 42% men) and 12 points difference in daily life (46% women, 34% men).

Language learners from the U.S. are more familiar with gender-inclusive language

Around 57% of U.S.-based language learners from the survey reported having moderate to high familiarity with gender-inclusive language. Of all respondents, only 44% reported that level of awareness, compared to 49% of students in France and 44% of students in Germany.

A drill-down into various aspects of life revealed that survey respondents from the U.S. were the most likely to agree or even strongly agree on the importance of gender-inclusive language in daily and professional life, and within the education system.

Only with regard to raising children were respondents in Germany slightly ahead: 48% ranked it as important, compared to the 45% of U.S. study participants.

To find out more about Lingoda's survey on inclusive language learning, the full report can be found here.

For this study, Lingoda collected quantitative data from 1,385 language learners on the platform. All students had a currently active Lingoda account and could opt into the survey through the My classes area.

Still Nervous to Travel? Take a Virtual Trip Around the World With Lingoda
With teachers and class participants located around the world, Lingoda's online language courses take students on a virtual trip
Lingoda - Aug 17, 2022

Lingoda's Online Language Courses Are This Summer's Must-Have Travel Item
Learning to speak a new language is this summer's travel staple as 83% of Americans have summer travel plans
Lingoda - Jul 20, 2022

Lingoda Partners With Polyglot and Netflix Host Jo Franco
The Netflix show host travels to Berlin in partnership with Lingoda to put her new German language skills to the test.
Lingoda - Jun 23, 2022