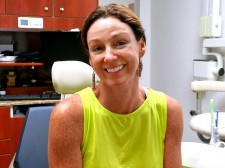 STAMFORD, Conn., October 3, 2017 (Newswire.com) - Dr. Leonard Kundel, DMD, a general dentist, with guidance from Dr. Michael Geis, DO, an osteopathic doctor, performed a life-changing laser lip- and tongue-tie release (frenectomy). Hillary, the patient, has suffered from chronic neck and upper back tension and pain for over a decade. She was diagnosed with cervical disc degeneration and right-sided brachial plexopathy. She had many failed attempts at alleviating her pain, including prescription medication, physical therapy, acupuncture, yoga, chiropractic manipulation and osteopathic manipulation. All of these treatments were effective in providing some relief but unfortunately with short duration, usually lasting less than a week. On her initial evaluation with Dr. Geis, the tongue and lip ties were identified. The presence of these ties, in combination with the chronic nature of her pain, multiple failed treatments, and multiple findings on physical exam led to the decision to release the tethered oral tissues. Watch the laser frenectomy video and hear Hillary's reaction to how wildly successful and life-changing the procedure proved to be for her (just two weeks after the frenectomy procedure).

In the video you will see:

The LightScalpel CO2 laser frenectomy was a key part in the overall treatment for this case and for many oral myofunctional cases he has treated in the past. Dr. Kundel uses the laser for treatment in conjunction with, and guidance from several different medical professions including: lactation consultants (to alleviate breastfeeding issues with infants), and osteopathic doctors (to alleviate chronic pain issues), speech pathologists, oral myofunctional therapists, and others.

Dr. Kundel is a 1999 graduate of Tufts University School of Dentistry. Following a year of residency at Montefiore Hospital and several associateships, he has established private practices in Stamford, Connecticut, and New York City, New York. Dr. Kundel has been studying Oral - Systemic connection for nearly two decades. The understanding of connection between the mouth and body is a foundation for his practice. Besides general gentle dentistry, Dr. Kundel addresses the problems that have to do with: breastfeeding difficulties, growth and development in children, sleep-disordered breathing in children and adults, jaw joint related disorders, and chronic oral inflammatory diseases known to increase the risk for common medical problems. To learn more about Dr. Kundel, please visit stamforddentist.com.

My mission for patients is to walk away from dental appointment knowing more. You will know how to help yourself and your child have healthy beautiful smile and a healthier and stronger body.