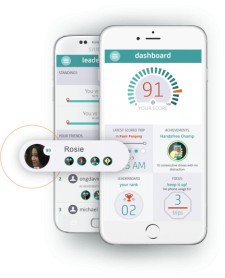 The app, known as DriveWell, automatically runs in the background to measure driving skills in five key categories: braking, acceleration, cornering, speeding, and phone distraction. Each trip is logged and trip summaries are displayed with mapped routes complete with identified events and an overall driving score. In addition, app users can invite friends to their leaderboard, receive badge achievements and get driving tips based on performance.  Drivers can compete for weekly prizes including fuel vouchers and Automobile Association of Singapore memberships, as well as a grand prize giveaway.

According to the Singapore Department of Statistics, there are about 8,000 traffic-related injuries each year in the country. A serious concern is an increase in reckless and dangerous driving incidents, up 50% from 2014 to 2015 according to police authorities in Singapore. This competition is aimed to encourage Singapore residents to drive safer and more responsibly.

“By becoming more aware of their behaviors, drivers can learn to be safer behind the wheel. Singapore’s Best Driver Challenge is an innovative way to make safe driving fun and exciting. Drivers can get useful feedback and driving tips, see how they compare with other drivers, and challenge their friends,” said Chang Sucheng, Chief Executive Officer of Liberty Insurance.  “Collaborating with CMT allows us to bring advanced technologies to the Singapore community, reward the safest drivers, and make our roads safer for everyone.”

CMT is a pioneer and the world’s leading provider of smartphone-based telematics solutions. With a mission to make roads safer by making drivers better, the DriveWell program from CMT has a proven record of improving driver behavior: an average reduction of 35% in phone distraction, 20% in hard braking, and 20% in at-risk speeding, all within less than 30 days of using the program.

To participate in the competition, which runs from September 30, 2016 until December 23, 2016, drivers in Singapore should register for an access code at the competition site:  https://www.libertyinsurance.com.sg/SingaporeBestDriver/ and download DriveWell from the Apple Store (iPhone) or Play Store (Android).

About Liberty Insurance
Liberty Insurance aims to become Singapore’s leading insurer by removing complexity and confusion, enabling customers to concentrate on the things that matter most to them. This is captured by the company’s slogan, ‘Embracing Simple Joys’. By being a strong partner, Liberty Insurance brings satisfaction to the lives of its customers.

About Cambridge Mobile Telematics​
​Cambridge Mobile Telematics (CMT) makes roads and drivers safer around the world. Headquartered in Cambridge, Massachusetts and founded in 2010 by two MIT professors and experienced entrepreneurs, CMT pioneered smartphone-based telematics and behavioral analytics, including new approaches to usage and behavior-based insurance. CMT’s award-winning DriveWell program is now used in numerous successful safe-driving apps and programs in many countries around the globe, with a proven record of changing driver behavior: an average reduction of 35% in phone distraction, 20% in hard braking, and 20% in at-risk speeding, all within less than 30 days of drivers using the app. For more information, please visit cmtelematics.com and follow on Twitter @cmtelematics.