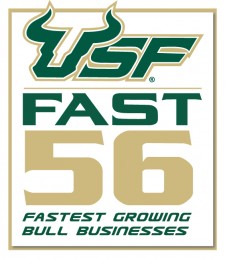 Tampa, FL, May 10, 2016 (Newswire.com) - The University of South Florida (USF) Alumni Association honored the 2016 USF Fast 56 – the fastest growing USF alumni owned or led businesses in the world – on Friday, April 29, in the Marshall Student Center Ballroom and Oval Theater at USF Tampa.

Leverage Digital is one of 56 USF Bull-led businesses inducted into the 2016 USF Fast 56 by USF System President Judy Genshaft and USF Alumni Association Board of Directors Chair Betty Otter-Nickerson.

"We are honored that Leverage Digital has been recognized by the University of South Florida as one of the fastest growing companies led by a USF graduate. I give much of the credit for this success to the education received, relationships built, and experiences enjoyed during my time as a student at USF,” said Jay Taylor, Founder and Managing Director at Leverage Digital. Mr. Taylor received both a bachelor’s degree in 2004 and a master’s degree in 2008 from USF.

To be considered for the USF Fast 56 program, an organization must have been in business for at least three years, have revenues of $250,000 or more for the most recent 12-month period, and be owned or led by a University of South Florida alumnus.

The 2016 USF Fast 56 companies were ranked by percentage of cumulative annual growth in revenue, as documented by Cherry Bekaert, a public accounting firm based in Tampa. Fifty-six USF alumni owned or led businesses were selected as recipients, in recognition of the year USF was founded, 1956. Of the 56 winners, the top 25 companies received special recognition during the awards ceremony.

About the USF Fast 56 Awards

The Fast 56 identifies, recognizes, and celebrates the world's fastest growing USF Bull-owned or Bull-led businesses. The awards celebrate their success while also providing a forum for passing lessons to the next generation of Bull entrepreneurs. For more information, please visit http://www.usfalumni.org/.

Leverage Digital is an award-winning digital marketing agency that partners with brands to successfully engage their audiences and achieve measurable results.