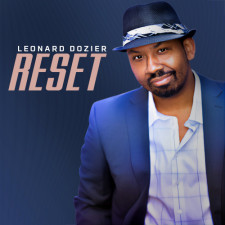 PHILADELPHIA, December 18, 2020 (Newswire.com) - Surely the pandemic — with its rising Covid rates and accompanying lockdowns — has its negatives.

But singer-songwriter Leonard Dozier, in his new single, ‘Sheltered in with You,’ encourages listeners to look at the bright side. To bring in some joy, peace and comfort in the midst of the darkness.

Though acknowledging that “We’re barricaded by something we can’t even see,” Dozier declares: “I thank God every day that I have you, my rock, my anchor.”

The inspiration for the single is Kymbah, Dozier’s wife of 16 years.

‘Sheltered in with You,’ to be launched Jan. 8, is being produced by two-time Grammy nominee Chris “Big Dog” Davis, who is also a jazz musician, producer, and Dixwell favorite. The classically trained Davis, a powerhouse in the music business, met with the singer-songwriter bass-baritone online after Dozier sought him out.

The song was co-written by Danny Fordham, a former Warner Bros. producer. Singer Tamira Charone joins Dozier on the vocals, with instrumentals by Davis.

The niece of singer, songwriter, and record producer Luther Vandross, Charone began singing professionally at 13. ‘When Leonard approached me about the song,’ said the alto-soprano-tenor, “I immediately said yes. I love the idea of the duets, which are rare these days.”

“Brother, you got a hit on your hands,” said Fordham, who knows Dozier from their acting days. “One of the best vocal performances, production, writing, I have heard for a long time.”

According to Dozier, the song is in the mold of R&B and Soul. “It’s a romantic piece that takes us back to the ‘70s and ‘80s, when things were not so abnormal,” he said. “The new single is a tribute to that era. We’re trying to embrace being sheltered in without negative politics and social connotations.”

Though well known as an actor and voice actor, Dozier’s career as singer-songwriter actually preceded the others. Dozier’s song is the first single on the new, forthcoming album called “Reset.” It will play on iTunes, Spotify, and other major online retailers.

Both Dozier and Charone look forward to performing the song live.