Leahann M. Cavanaugh's New Book 'The New World: The Awakening' Tells of a Goddess's Perilous Journey to Save Earth from Divine Destruction 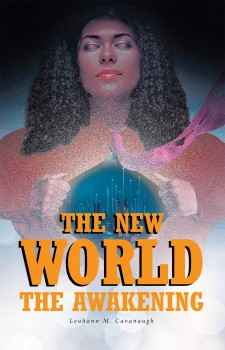 TOLEDO, Ohio, October 23, 2020 (Newswire.com) - Leahann M. Cavanaugh, a dedicated writer, mother, and poet from Toledo, Ohio, has completed her most recent book "The New World: The Awakening": a page-turning novel about a goddess from a different reality who rediscovers her powers to thwart God's plan of destroying Earth.

Leahann writes, "In 'The New World: The Awakening,' God has lost hope and faith in his creation and is planning to destroy it and start anew. Mankind's only hope to stop God from his plans of destruction rests in the hands of Lyric Daniels, a goddess incarnate from the alternate reality Gaia.

"As Lyric's mission begins, she struggles with the ability to ascend Earth, knowing that that's the only way. For some reason, her powers are foreign to her, and she can't remember how to harness and awaken them. But once she finds her memory, which she stored away for safekeeping, she can convince God that mankind is worth saving.

"Accompanied by her best friends, Miles and Denise, and under the protection and guidance of her Gaian, her twin soul, Jason, Lyric endures life-threatening trials and tribulations along the way. Unbeknownst to her, the journey will become more difficult than she could have ever imagined.

"In the end, she will be faced with the decision to either sacrifice herself to save Earth or to return to Gaia and live out her last incarnate life with Jason."

Published by Fulton Books, Leahann M. Cavanaugh's book contains thought-provoking and emotionally driven scenes depicting the struggles of a goddess burdened by a dangerous mission to save the world from godly retribution.

This book witnesses the awe-inspiring moments of a goddess whose compassion and determination determines the fate of Earth.

Readers who wish to experience this rip-roaring work can purchase "The New World: The Awakening" at bookstores everywhere or online at the Apple iTunes Store, Amazon, Google Play, or Barnes & Noble.

Wayne Moody's New Book 'The Journey of Wayne' Brings Out This Fascinating Account of a Man Who Has Been Continuously Battling Life's Adversities
Fulton Books - Dec 2, 2020

Shirle Moore Smith's New Book 'A View From the Pew' is a Profound Inspiration Full of Hope and Strength From One's Firm Faith
Fulton Books - Dec 1, 2020

Cissie Bragan's New Book 'The Light and the Leprechaun' Uncovers an Adventurous Search for a Leprechaun
Fulton Books - Dec 1, 2020
Newswire