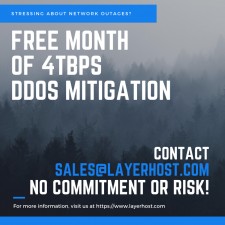 LOS ANGELES, February 17, 2020 (Newswire.com) - ​​LayerHost, Infrastructure-as-a-Service (IaaS) and a global leader in DDoS​ mitigated hosting services, has announced the public release of their 4Tbps DDoS mitigation service. In anticipation of the continued growth distributed denial of service (DDoS) attacks, LayerHost is providing a groundbreaking service that can absorb DDoS attacks up to 4Tbps.

In February of 2018, GitHub experienced the largest known DDoS attack to date at 1.35 Tbps. The attack took one of the world's most popular and trafficked sites down for about 10 minutes intermittently. "Between 17:21 and 17:30 UTC on February 28th we identified and mitigated a significant volumetric DDoS attack. [...] It was an amplification attack using the memcached-based approach described above that peaked at 1.35Tbps via 126.9 million packets per second," GitHub said.

Experts anticipate that these attacks will only get larger and more disruptive as time passes. Through the activity of Anonymous and other "hacktivist" groups, the technology to take down a website through a DDoS attack is increasing rapidly. Many experts believe that larger DDoS attacks have already occurred, but the victim companies or agencies have kept the attack secret to prevent any public concern.

By providing 4 Tbps DDoS mitigation, LayerHost is able to protect their clients at a level that exceeds any attack known to date.

"Simply put, it's not a matter of 'if', it's a matter of 'when'," said Mohamad Kazah, CEO of LayerHost. "We're offering a service that is already ahead of the most severe attacks known to date, both publicly and some that we're aware of privately. The relative simplicity of DDoS attacks makes them a favorite of persons and organizations that just want to inconvenience a website owner."

"My company was one of the first to adopt LayerHost's 4 Tbps DDoS mitigation service," said Premesh C., CEO of a Genius Guard. "We'd been attacked at least seven times and everything else we tried failed. We haven't had any downtime due to a DDoS attack since we put the LayerHost system in place. It's the right answer for our company."

LayerHost is offering a Free Month of service of their 4Tbps DDoS mitigation as a proof-of-concept. Interested? Please contact sales@layerhost.com or call +1-833-247-HOST (4678).

Our roots can be traced back to 2008, when LayerHost started out in the gaming industry as a premier game server provider for such games as: Counter Strike 1.6, Day of Defeat, and Team Fortress Classic. As we continued to grow, we further expand ...