Laurie Ravin and Alexis Kantor's New Book 'Veridesian Tales: The Hidden Woodlands' is a Fantastical Lesson in Stewardship and Protecting the Magic of Nature 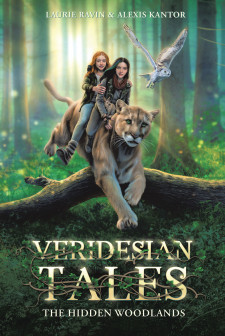 COLUMBIA, Md., October 31, 2022 (Newswire.com) - Fulton Books authors Laurie Ravin and Alexis Kantor, lifelong learners with a passion for the environment and telling stories, have completed their most recent book "Veridesian Tales: The Hidden Woodlands": a whimsical and potent story about the dangers of deforestation through the eyes of a girl with a unique gift to communicate with nature.

"In Veridesia," writes authors Ravin and Kantor, "the creatures are aware that Earth humans are the dominant creature, enjoying and using the gifts of their planet and all its life-forms while taking little to no responsibility for its welfare."

Published by Fulton Books, Ravin and Kantor's book takes readers on a journey through Veridesia, a magical woodland in California. To an ordinary human, Veridesia looks like any other forest. Only special humans, called Veridesians, can see the true wonder it contains. The highest of the Veridesians are called to be Guardians of their extraordinary land, protecting it from outside humans and preserving its magic.

One such Veridesian, named Katt, inherited Guardianship at a very young age. For centuries, the creatures of Veridesia have depended on her Clan for protection from the "regular" world. Her abilities are still developing, but a dark change is looming. With the help of her animal friends, can Katt maintain peace and harmony in Veridesia despite sudden intrusions from the violent outside world?

Laurie Ravin wrote "Veridesian Tales" with her granddaughter, Alexis Kantor. The duo say they have always shared a deep love of making up stories together, and now they bring that passion to readers. Ravin and Kantor have already begun writing the second installment in the "Veridesian Tales" series and hope that "the beauty of Veridesia will inspire readers to become positive, active influencers in taking responsibility for the current and future health of our planet by gaining more information, asking difficult questions, seeking employment in impactful fields, and being good to our planet in their daily practices."

Readers who wish to experience this gripping work can purchase "Veridesian Tales: The Hidden Woodlands" at bookstores everywhere, or online at the Apple iTunes store, Amazon, Google Play, or Barnes and Noble.