Launching the Holiday Season With The Way to Happiness

Veronica Mars actor Jason Dohring and family joined The Way to Happiness Foundation in promoting a message of "Love and Help Children."

Once again, this year’s parade included celebrities, giant balloons, floats, marching bands, equestrians, classic cars and Santa on his sleigh. And as it has for three decades, this year’s parade also featured The Way to Happiness—a float based on the common-sense guide to better living written by author and humanitarian L. Ron Hubbard.

Sitting atop the float this year was Jason Dohring of Veronica Mars fame along with his wife Lauren, and the two oldest of the couple’s children, Owen and Lilly. “These principles have meant so much to me, I jumped at the opportunity to be a part of this. I’m now teaching these important values to my own children — things like ‘Setting a Good Example,’ ‘Take Care of Yourself,’ ‘Be Worthy of Trust.’ These have been such helpful guiding principles in my life and I consider it an honor to be able to share these with others.”

The float was designed and created by volunteers. Its traditional winter setting includes a snow-covered field surrounded by fir trees. At the back is a 10-foot round backdrop with The Way to Happiness logo. A large book at the front highlights one of the 21 precepts of the book: “Love and Help Children.”

The Way to Happiness was written by Mr. Hubbard in 1981. Immensely popular since its first publication, some 125 million copies in hundreds of languages have been distributed in 186 nations. The book holds the Guinness World Record as the single most-translated nonreligious book. 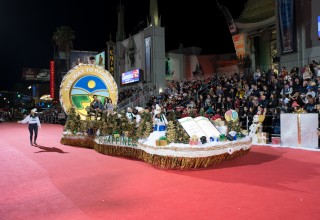 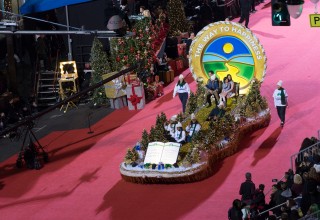 About The Way to Happiness Foundation International