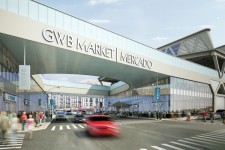 Located on Broadway Avenue in the center of the George Washington Bridge Mall/Mercado, the state of the art digital billboard will be the largest full motion digital billboard north of Times Square and will run 24-hours a day featuring live streaming video and digital displays including promotions by national brands and local businesses.

The George Washington Bridge Mall/Mercado billboard, owned and operated by RCBS Media Group, will also serve a vital role in the community by alerting the public of emergencies. It will display AMBER Alerts for child abduction cases, Silver Alerts to report missing persons especially seniors who have gone missing and are suffering from Alzheimer’s disease, dementia or other mental disabilities as well as other emergency notifications.  These alerts will be displayed within minutes and will be given precedence over other digital content.  Additionally, the billboard will present campaigns to educate and inspire the public with messages regarding quality of life issues.

“This billboard will serve the community and the citizens of New York as well as contribute to the economic growth and vitality of the region 24 hours a day,” noted Rick Bacchus, a partner with RCBS Media Group.  “It is a fine example of our country’s technological growth and advancement and of our future filled with increasingly dynamic visual displays and presentations that inform, educate, inspire and entertain us.”

With just two months remaining before its official launch, numerous slots on the RCBS digital billboard have already been reserved.