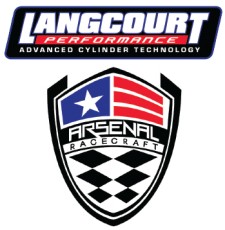 Arsenal has a tremendous opportunity to be an important player in the motorcycle aftermarket industry.

DC V-Twin used a stock 2014 Harley-Davidson Street Glide with a VHR Pro Pipe and a SE Heavy Breather as the test bike and the Dyno results were 78.4 HP and 99.5 Foot Pounds of Torque. When the AR-107 kit was bolted on, it went to 131.7 HP and 117.8 Foot Pounds of Torque. That is an industry best 65%+ horsepower, turning a standard Harley-Davidson into a performance machine that has been extensively tested.  This Arsenal Racecraft Performance Kit will provide industry-leading performance with bulletproof durability that will outperform anything else on the market. The company is releasing its performance parts catalog for Indian motorcycles in the first quarter of 2017.

CEO John Silseth stated, "Arsenal has a tremendous opportunity to be an important player in the motorcycle aftermarket industry."

Colbert Seagraves VP of Marketing & Racing Operations had this to say, “As a collective team we have developed a superior product utilizing stock parts and giving the riding enthusiast a better performing ride."